Mark Cuban shed some light on the story, saying that Garoppolo’s personal life is his business and that, as long as he performs on the football field, whomever he chooses to date doesn’t really matter.

“I don’t think it’s a big deal at all. It actually would be a bigger issue if he was trying to hide it. But when you sign up for an endorsement or you hire somebody to endorse your product, you have a sense of their personality, and you know what you’re getting. If he’s true to himself and he’s being out in the open, I don’t see it as being a problem at all. I don’t know who he has sponsorships with or deals with, but, again, if you signed up with him, you know who he is. You don’t all of the sudden come out of left field and start dating porn stars and have an about face in your personality. This is who he is and he’s not trying to hide it. He’s wide open. And the reality is, it’s gone viral. So, now, he’s got all the more visibility — and that’s typically a good thing,” Cuban told TMZ.

Garoppolo’s personal life hasn’t ever been front page news, but now that he’s no longer a backup quarterback, people seem to care more about what he does in his free time. Garoppolo was previously linked to Boston-based model, Alex King. After video of Garoppolo and Kiara Mia surfaced online, King deleted the photo that she had with Garoppolo from her Instagram account. 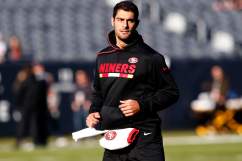 Does Jimmy Garoppolo Have a Girlfriend?