Getty LeBron James is vacationing in Italy with his wife.

Now that LeBron James has made his decision to sign with the Los Angeles Lakers, James has shifted his focus to spending time with his wife, Savannah James, along with their three children: LeBron Jr., Bryce and Zhuri. According to TMZ, the James family is vacationing in Italy, and has spent the majority of their time cruising on a massive yacht.

TMZ reported LeBron flew from their family vacation in Anguilla to Los Angeles to meet with Magic Johnson and the Lakers. LeBron then re-joined his family in Portofino. TMZ detailed the James family vacation.

LeBron jumped ship to dine at a restaurant. It’s interesting … Magic makes an annual trek to Italy with Samuel L. Jackson almost every year, so it seemed the 2 might meet up there. We’re told Magic won’t hop aboard until August, which is weeks away.

LeBron will probably be gone before Magic arrives … then again, he is the King.

Ebony reported LeBron and Savannah enjoyed a romantic dinner in Positano, Italy hours after the Lakers announcement was made. While LeBron has agreed to terms with the Lakers, a contract cannot officially be signed until July 6 at 12 p.m. Eastern. ESPN reported James is unlikely to do an introductory press conference with the Lakers. The James family recently purchased their second Los Angeles home in the Brentwood neighborhood. According to The Los Angeles Times, the new house came with a $23 million price tag. The Los Angeles Times described their new home.

Sitting up from the street, with city-to-ocean views, the 15,846-square-foot home is furnished with an elevator, a home theater and a custom kitchen with a La Cornue range. A lower level was designed for entertaining and holds a home theater, wine cellar, cigar room and onyx-lined wet bar.

There are eight bedrooms and 9.5 bathrooms as well as a spa with a steam room, sauna and massage room. Oversized glass doors open to an expansive loggia with built-in heaters. A swimming pool and spa complete the grounds.

Here’s a look at the LeBron’s new L.A. home.

LeBron’s wife, Savannah, has been actively involved in their foundation work, primarily focused on Akron area youth. Savannah helped launch a new initiative called Women of Our Future where she mentors girls at her former high school, Buchtel. It will be interesting to see if LeBron and Savannah will expand their focus to include their new Los Angeles locale. Savannah admitted to Cleveland Magazine that she did not give LeBron her number when he first asked a friend for it during their high school days.

“I’m like, ‘Um, nope. I’ll take his number,’ ” Savannah told Cleveland Magazine. “One day I’m sitting around — I was probably bored or something — and I’m like, ‘Oh, I forgot! I have this number for this guy that I can call. He seemed interested, so let’s see.’ ”

LeBron Jr. Could Play With the Sons of Scottie Pippen & Kenyon Martin

Lebron’s oldest son, LeBron Jr., high school recruitment has garnered almost as much attention as his father. At 13, LeBron Jr. still has one year to go before he will be in high school, but there is talk “Bronny” could be on his way to Sierra Canyon. The school already has the sons of former NBA players like Scottie Pippen and Kenyon Martin. LeBron has admitted he has not ruled out the idea of staying in the NBA until his son could potentially be in the league.

“I know I won’t be able to play at this level forever, but to be washed and play… I don’t know if I can play washed,” LeBron told GQ. “…I don’t know if I could play washed, but I damn sure would love to stick around if my oldest son can have an opportunity to play against me. That’d be, that’d be the icing on the cake right there…I’ll foul the sh– out of him! I’d give him all six fouls. I’d foul the sh– out of Bronny, man.” 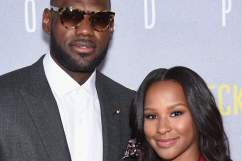