Getty Colombia's Egan Bernal celebrates his best young's white jersey on the podium of the nineteenth stage of the 106th edition of the Tour de France cycling race between Saint-Jean-de-Maurienne and Tignes, in Tignes, on July 26, 2019.

Egan Bernal is a Colombian cyclist that leads the Tour de France with just two stages to go. He fought through a hailstorm to storm into the lead after Stage 19 Friday. The 22-year-old started the day 90 seconds behind Frenchman Julian Alaphilippe, but looked to be two minutes ahead before race organizers halted the stage due to the weather.

It has since been clarified that Bernal now leads Alaphilippe by 45 seconds in the overall standings after race officials provided an eight-second time bonus at the summit of the Col d’Iseran.

If he continues his climbing prowess in the final stage of the Alps, Bernal should be able to surge to his first Tour de France title. Here are 5 Fast Facts you need to know about him.

1. He Could Make History as the First South American Cyclist to Win the Tour de France

Bernal was born on January 13, 1997 in Zipaquirá, which is a city about 47km northeast of the capital city of Bogota. As a Colombian, he could be the first South American to win the Tour de France.

While Spain has the third-most champions with seven cyclists winning 12 titles, no other Spanish-speaking nation has produced a champion. France naturally has the most with 23 individuals taking home 36 championships, although no Frenchman was won since Bernard Hinault in 1985.

The impending historic moment for Bernal has hit him emotionally, particularly when he donned his first yellow jersey after Stage 19.

“I was going at full speed, I attacked, and then was told to stop,” Bernal told French television according to Cycling Tips. “‘No! Not now!’ I was told that the race was stopped, and when it was explained that I was a leader and I had the yellow jersey, I did not believe it. The road was dry but we could not to continue the race due to the state of the road, but at the moment it was very weird. What matters is that I have the yellow jersey. It was a dream for me. Tomorrow there is still a very hard stage, but when I was given the yellow jersey and the lion, I really wanted to cry. I still cannot believe it.”

Even Alaphilippe has admitted that his Colombian opponent is simply stronger on the uphill climbs, which will still be in play over the next 59km.
“I don’t think it is possible,” said Alaphilippe when asked if he could regain the yellow jersey. “I have been beaten by something that is stronger than me, that’s how it is.”

2. His Parents Didn’t Know They Were Going to Have Bernal Through 8 Months of a Pregnancy

According to El Espectador, his parents Flor Gómez and Germán Bernal confused pregnancy for a medical condition. They talked to their doctor Jose Bulla after Flor suffered from dizziness, vomiting and constant pain in the stomach.

Instead, Bulla simply touched Flor’s belly and noted that she had one month left in her pregnancy with Egan, who would be their first-born. According to a rough Google translation, Bulla suggested the name to Flor and German.

“Let me choose the name. I have a perfect one,” Bulla said. Since he was a longtime friend of the parents, they agreed. “It’s going to be called Egan. In Greek I think it means champion, as cast forward. Put him like this and let me be the godfather.”

The actual greek word for champion is προασπίζω, which isn’t even close to Egan.

3. His Father Was a Stong Cyclist in His Own Right

According to Egan Bernal News, his father German was also a “strong rider.” This surrounded Egan with a cycling environment, which led to him jumping on a mountain bike at age 8.

It wasn’t the road bike though, Bernal picked up a mountain bike. For years Bernal was focused on riding on technical courses in the sand, mud and woods. That Bernal had talent was clear from the beginning, Bernal won a lot of races and performed well in the biggest races. As a junior Bernal participated in the MTB World Championship in 2014 and 2015 and he finished on the podium on both occasions.

He started watching races such as the the Giro, Tour and Vuelta as a kid. However, it took some peer pressure to finally get Egan into competition.

“I started because my dad was a cyclist in his youth, not a professional though. When I was eight he took me to ride at the weekends,” he said to Cycling Tips in 2016. “One day there was a race for the kids in our town, but my dad didn’t want me to compete. Another friend signed me up and gave me a helmet.”

4. His Early Success in Colombia Earned Him a Professional Contract with Androni Giocattoli – Sidermec

In 2013, Bernal participated in the Vuelta Futuro, the primary U17 race in Colombia. After winning the queen stage at the Clasica Juventudes Cajica, as well as a solo victory at the Sognando Il Giro della Fiandre in Italy, he earned a professional contract through Androni Giocattoli – Sidermec.

He earned his first win at the Tour de l’Avenir in 2016. Two years later, he transferred to Team Sky. Since then, his accolades include:

5. He Has an Girlfriend Named Xiomy Guerrero

Pictures of @Eganbernal in hospital after crash, posted by his girlfriend on Instagram… No need to read between the lines. pic.twitter.com/4JLxkSnaoH

According to Cycling Tips, Bernal lives in Zipaquirá with his girlfriend Xiomy Guerrero. They are also five minutes from his parents, as well as his 12-year-old younger brother.

When he donned his first yellow jersey, Guerrero and his family were waiting on the podium. It led to an emotional scene.

As he strode toward the podium calmly, several from his entourage cried openly. It was the culmination of a series of surreal events that ended with him leading the biggest bike race in the world with one mountain stage remaining, adorned in the maillot jaune while clutching the ceremonial stuffed lion of longtime yellow jersey sponsor Crédit Lyonnais.

She has been incredibly supportive on her various social media platforms. 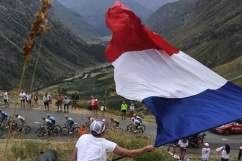