Getty Carlos Bocanegra (2nd R) #3 and Frankie Hejduk (no shirt holding trophy) #2 of the USA celebrate with the trophy after their 2-1 win against Mexico during the CONCACAF Gold Cup Final match at Soldier Field on June 24, 2007 in Chicago.

The United States faces rival Mexico in the Gold Cup Final Sunday night at Soldier Field in Chicago (9 p.m. Eastern time, FS1). The Americans are the defending champions in the tournament after a 2-1 win over Jamaica in 2017. Mexico last won in 2015, also over the Reggae Boyz.

This will be the sixth meeting between the two teams in the final. Mexico holds a 4-1 advantage in such matchups, as well as a 20-37-14 record all-time according to 11v11.

Let’s take a look at the history between the teams in the Gold Cup final.

The Americans were just three years removed from their first World Cup appearance in four decades. Meanwhile, El Tri missed the 1990 World Cup due to the Cachirules controversy, which disqualified the program for using players above the age limit on younger teams.

Mexico took out a lot of frustration on the USMNT in Mexico City. A Desmond Armstrong own goal pushed the deficit to 2-0 at halftime, and then two goals in the final twenty minutes led to the final margin.

Both teams ended up qualifying for the knockout stage at the 1994 World Cup hosted by the United States.

The next matchup took place in the Los Angeles Coliseum on Feb. 15, 1998. American goalkeeper Kasey Keller kept the USMNT in the match, but allowed a goal in the 43rd minute to Luis Hernandez.

The last time the two teams met in Chicago, the United States notched their only victory in a final. After falling behind 1-0 after a Andres Guardado goal in the 43rd minute, Landon Donovan tied it up with a penalty kick in the 61st minute.

After a shot rebounded to Benny Feilhaber in the 73rd minute, the American midfielder rocketed a shot into the net for the decisive second score.

“It’s a really special moment for me,” Feilhaber said to MLS Soccer back in June. “I couldn’t tell you what was going through my head at the time. I don’t think I’ve ever really recalled. It was a big game against Mexico in the finals, so to win that tournament was awesome.”

The tournament win came only months after Bob Bradley took over for Bruce Arena as interim head coach. It set up a successful run for the American coach, which included an appearance in the World Cup knockout stage in 2010. 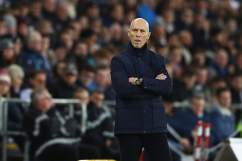 El Tri roared back in the rematch with a 5-0 drubbing at Giants Stadium in East Rutherford (N.J.). The game was actually tied at 0-0 in the first half, but as the New York Times wrote at the time, the Mexico counterattack overwhelmed an undermanned lineup in the second half.

Sunday, all of Mexico’s goals came during a furiously counterattacking second half. The first four were delivered or facilitated by a pair of 20-year-old forwards, Giovani dos Santos and Carlos Vela. They have struggled to get regular playing time with their British club teams — dos Santos with Tottenham and Vela with Arsenal — but both were too fast and creative for the Americans, who wilted in the heat.

The United States played without Landon Donovan, Tim Howard and virtually every starter, but it didn’t take away the sting of the loss to a bitter rival.

The last matchup between the teams in a final happened at the Rose Bowl in Pasadena. The United States, looking to assert itself after the 2009 debacle, took a 2-0 lead in the first 23 minutes.

Barrera scored his first goal in the 29th minute and Andres Guardado, who was playing with an injured left ankle, netted the equalizer in the 36th minute, setting the stage for a second half dominated by the Mexicans.

As Al Jazeera noted at the time, Pablo Barrera broke the deadlock in the 50th minute, setting up the goal of the tournament by Giovanni Dos Santos.

Dos Santos netted inarguably the goal of the tournament, dancing around US goalkeeper Tim Howard, who had charged out of his net after a loose ball, then spun past two stunned defenders and chipped the ball over a leaping Eric Lachaj into the upper right corner of the net.

The loss eventually lead to Bradley’s dismissal and the hiring of Jurgen Klinsmann.