It has been a big year for Max Scherzer and his wife, Erica (formerly May) Scherzer. Not only are the Nationals playing in the World Series, but the couple celebrated July 4th by welcoming their second daughter, Kacey Hart, to the world.

Max took a few days of paternity leave to be with Erica for Kacey’s birth. The Nationals pitcher did not end up missing a start as he took the mound on his scheduled day back in July. Max noted that Erica was in favor of him pitching as scheduled.

“[Erica] wanted me to pitch today,” Max explained to The Washington Post. “She wants me pitching. We got the in-laws in. We got help. She’s a baseball wife. She’s a pitcher. She wants me out there competing.”

Max and Erica welcomed their first daughter, Brooklyn May, on November 28, 2017. The couple initially announced their latest baby news at the beginning of 2019 as Max had his jersey retired at Missouri.

“Amazing weekend back in Columbia to see Max’s number retired at Mizzou. And a great opportunity to share the news we have a lil’ tiger on the way! Baby girl Scherzer #2 arrives this summer!” Erica tweeted.

Happy Two Year Adoptaversary to the happiest, most loving and biggest troublemaker in our pack! #Rocco #adoptdontshop

After Hurricane Harvey hit in 2017, Max and Erica helped out by paying for the adoption fees for animals displaced in the storm. The couple paid the fees at two local D.C. shelters as Max explained on Twitter.

It was not just a one-time thing for the couple who remain involved in the animal rescue movement. The couple is part of the Humane Rescue Alliance and there are plenty of ways for fans to get involved.

They are releasing a 2020 calendar featuring Nationals players along with their pets, per Washington Times. There are also amazing shirts that feature a dog with one brown eye and one blue eye just like the pitcher. The proceeds from both products go to the Humane Rescue Alliance.

Erica May Scherzer is an activist, feminist, social justice and human rights advocate who has worked with multiple non-profits in Arizona, Michigan, and Washington, D.C. Throughout her travels across the country, Erica has found that her activism and community work are intertwined with modern slavery. Her work with Polaris focuses on leveraging her knowledge of and experience with these connections to human trafficking on Capitol Hill.

Such an amazing night. We’ve all been saying it, but this really is a special group. NLCS, here we come!! #stayinthefight #Nats

The two were both pitchers at Missouri where the couple met in college as student-athletes. The Scherzers are a family full of pitchers as Erica took the mound on the Missouri softball team just like her husband did for the baseball squad. During the playoffs, Erica called the Nationals a “special group.”

“Such an amazing night. We’ve all been saying it, but this really is a special group. NLCS, here we come!! #stayinthefight #Nats,” Erica noted on Instagram. 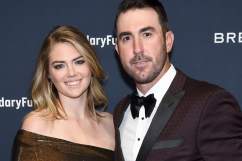