Despite starting the season 6-2, the Seahawks made a risky signing with Josh Gordon, and Russell Wilson was a big reason for the move. Multiple reports indicate that Wilson campaigned for the Seahawks to sign Gordon.

Wilson took to Twitter to welcome the newest Seahawk and also provide a bit of a reminder that it is time to go to work when he lands in Seattle.

What Gordon Means for the Seahawks

Seahawks fans (and fantasy owners) want to know what the Gordon signing means for the team as well as the receiver. The players this signing most likely impacts is Tyler Lockett and David Moore.

We are likely to see three-receiver sets with Gordon joining Tyler Lockett and D.K. Metcalf, even if it takes a couple games for this to take shape. While Gordon has straight-line speed, the Seahawks can utilize their new receiver in the slot which could take away a few targets from Lockett. Metcalf’s red zone looks are still going to be a thing given his ability to excel as a big, physical receiver in the endzone as he has shown during his rookie season.

The Seahawks Were “Surprised” Gordon Was Available on Waivers

Seahawks head coach Pete Carroll admitted the team was “surprised” to see Gordon was available given the team was down the list on waivers, per The Athletic’s Michael-Shawn Dugar. Carroll also called Gordon a “unique” talent that was too good to pass up despite how well the Seahawks receivers have performed this season.

“Pete Carroll just called Josh Gordon a ‘unique’ player. Says it wasn’t a matter of need, they just like Josh’s talent and wanna see what he can do. They’ll find out during next week of practice…Josh Gordon was subject to waivers so plenty teams passed on Josh before he was claimed by Seattle. Pete was surprised he was available to them,” Dugar explained on Twitter.

Seattle Can Easily Cut Gordon If Things Do Not Work Out

“THE FEARS WE DON’T FACE BECOME OUR LIMITS.” #lfg

Despite all the benefits of adding Gordon, there is also a legitimate risk with the receiver. Gordon’s battle with drug addiction has been well documented, and his stay with the Patriots did not work out entirely as either party hoped. The Browns also cut ties with the receiver in 2018, and Gordon has had multiple chances to make things right.

Despite the Patriots having needs at wide receiver, Gordon underwhelmed during the first half of the season and has battled injuries this year. The Seahawks have not shied away from players with risk, but the team also has a strong history of moving on if the player becomes a problem.

John Schneider and company believed Gordon’s talent and potential outweighed any of this risk. Both Gordon and the Seahawks are hoping his time in Seattle has staying power. 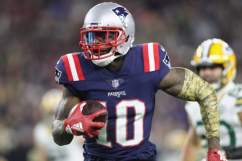