Instagram Deshaun Watson's girlfriend Jilly Anais is in Kansas City cheering the Texans on during the playoffs.

For months, there have been rumors that Deshaun Watson’s girlfriend was model Jilly Anais. The rumored couple have been pretty secretive about their relationship status, but it looks like the NFL playoffs have provided a little clarity.

Anais’ Instagram Story is full of photos from Kansas City where the Texans are taking on the Chiefs in the Divisional Round. Anais documented her trip from the Kansas City airport all the way to photos of herself decked out in Watson’s jersey on the field just hours before kickoff. Anais posted photos of her arrival in Kansas City with members of her family.

InstagramDeshaun Watson’s girlfriend Jilly Anais is at the Texans-Chiefs game.

Later, Anais showed off her Texans gear complete with a Watson jersey and tagged the quarterback in the post.

“4’s up. We ready!!!” Anais noted in the caption citing Watson’s jersey number.

Anais finished off the Story with photos on the field from Arrowhead Stadium just ahead of kickoff.

“Game time baaaby!” Anais noted along with a Texans graphic.

Both Watson and Anais social media pages had previously been devoid of any indications that the two were an item. It looks like the couple may be close to making things Instagram official.

Just days before the Bills-Texans playoff game, TMZ reported that Watson celebrated New Year’s with Anais. Watson also reportedly gave Anais a diamond bracelet for her birthday and some of the quarterback’s Texans teammates attended the celebration, per TMZ.

And, if ya watch the clips … it ain’t hard to get a read on that — ’cause pics of Watson and Jilly were laid out all over the birthday table!!

As for the rest of the party … backup QB AJ McCarron’s wife, Katherine Webb, was there — and she posted video of Watson and Jilly kissing, saying “We love you!”

Watson Made Several Clutch Plays Against the Bills in the Postseason

After a slow start, it appeared the Texans’ time in the postseason would be short-lived. Watson came alive in the fourth quarter and overtime to orchestrate a comeback win marking his first playoff victory. The Texans quarterback had an interesting analogy when describing his role on the team.

One person who has remained a steady influence in Watson’s life is his mother Deann Watson. The quarterback surprised her last year with a home renovation.

“She deserves it,” Watson noted, per NFL.com. “It’s been a solid home for us for … over 12 years now. (But) living room, kitchen and dining area, those areas need a little touch up. Everything she went through, this is really the smallest thing I can do for her.” 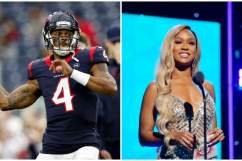