Getty Tua Tagovailoa sustained a dislocated hip during the 2019 season.

It’s a right hip dislocation and posterior wall fracture. The hip joint is composed of the “ball” portion (the round head of the femur, or thigh bone) and the “socket” portion (the deep, saucer-shaped acetabulum, which is part of the pelvis). The joint is inherently stable and requires a great deal of force to disrupt, but a high-energy impact in just the right direction can cause the ball to move out of position relative to the socket, resulting in a dislocation.

Prior to the Citrus Bowl, Alabama head coach Nick Saban provided an update on Tagovailoa’s recovery.

“[Tua is] doing well, everything so far has been really, really good in terms of his rehab and the progress he’s making,” Saban told ESPN, per 247 Sports. “But this is a work in progress and it’s going to take a lot of time. He’s been working really, really hard and our medical staff has done a fabulous job with him from Day 1 of the surgery to how the rehab has gone.”

“Tua underwent successful surgery on his right hip Monday morning in Houston. The procedure went as planned, and he is resting comfortably,” Cain said, per Montgomery Advertiser. “Tua’s prognosis is excellent, and we expect him to make a full recovery. He will return to Tuscaloosa in the next several days to begin his rehab.”

Tagovailoa Will Have a Decision to Make About the NFL Draft

Tagovailoa has yet to announce whether he will declare for the 2020 NFL draft or opt to return to Alabama for his senior season. While Tagovailoa has not ruled out a potential return, the quarterback admitted that it would be hard to pass up an opportunity to head to the NFL if he still projects to be a top-15 pick. Most draft analysts still have Tagovailoa being selected inside the top 10.

“I think that’d be tough to pass up,” Tagovailoa told ESPN in December. “But there’s a lot more to it than that in some aspects…This isn’t something that I can rush. If I want to play to my full potential, I know I can’t just come back and play on it as if it were my ankle. I think a lot that has to go into my decision-making, too, as to whether I stay or leave.” 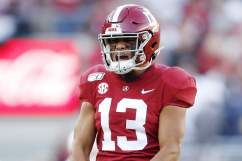