Getty Kicker Robbie Gould of the San Francisco 49ers did an AMA on Twitter Sunday.

San Francisco 49ers kicker Robbie Gould took to Twitter Sunday to treat his fans and followers to an AMA (Ask Me Anything). Gould discussed everything from whether or not he can kick left-footed (yes, he can, he says, from 50 yards out!) to whether or not a hot dog is a sandwich. His answer? Only if it’s a “burger dog.”

At one point, Gould’s teammate, All-Pro tight end George Kittle, joined in and asked which member of the 49ers Gould could beat in a 40-yard dash competition.

Gould gave many fun and candid replies throughout the AMA, but one response in particular may be of interest to fans of the Chicago Bears. 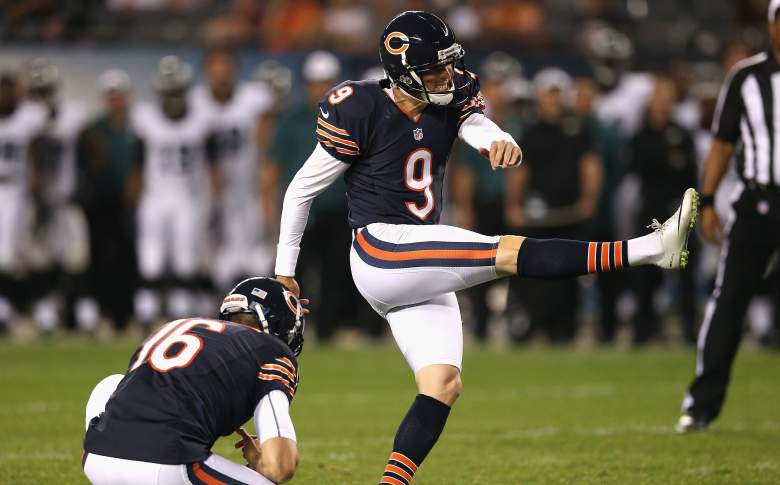 GettyRobbie Gould is the all-time leading scorer in the history of the Chicago Bears. He has gone on record multiple times as saying he loves the city of Chicago.

Gould was unsigned after the 2005 NFL Draft, and the Bears picked him up October of that season. He went on to become the team’s all-time leading scorer with 1,207 points in 2015, surpassing Kevin Butler, kicker on the legendary ’85 Chicago team.

Gould was asked by one fan whether or not he was going to retire as a Chicago Bear, and he left no doubt. “Yes, I will one day retire as a Bear,” Gould tweeted.

Yes, I will one day retire as a Bear

His time with the Bears also includes his favorite memory as a player, Gould revealed in the AMA.

Gould saying he plans on retiring a Chicago Bear is by no means a suggestion he wants to be traded to the organization. Dallas Clark, for example, played for the Indianapolis Colts for nine seasons before finishing his career with the Baltimore Ravens and Tampa Bay Buccaneers. Clark, as many players do, came back to sign with the Colts for a day so he could officially retire as a member of the organization. It’s presumed Gould has similar plans.

While there was talk in the 2019 offseason linking Gould to the Bears, who were in search of a kicker after the Cody Parkey debacle, that talk never materialized, and Gould signed a four-year, $19 million deal with the 49ers.

Gould played in Chicago for his first 11 seasons in the league, and he has not been shy about expressing love for the city and the fans of the franchise who first gave him his shot.

“I love the city of Chicago. I always will,” Gould said in January. “That love I have for the city and the Bears organization will never go away. I said it when I got cut: Once a Bear, always a Bear. I truly mean that.”

READ NEXT: After Years of Tragedy, 49ers Wide Receiver and Wife Welcome Child