Facing the prospect of his first full NFL season in three years, Cleveland Browns running back Kareem Hunt is eager to get back on the field. And he’s bringing the heavy chip on his shoulder with him.

Hunt, who is entering his second season with the Browns, acknowledged he feels overlooked at times by those around the league during an appearance on Cleveland Browns Daily on Wednesday.

.@Kareemhunt7 on @Browns_Daily: I was born with a chip on my shoulder. I can't wait to go out there and shine. I'm going to come out there and get mine.

“I was born with a chip on my shoulder. It’s definitely still here, more than ever,” Hunt told hosts Nathan Zegura and Beau Bishop. “I definitely can’t wait to go out there and shine. My name really don’t get brought up much at all. But it’s fine. I’m going to come out there and get mine. That’s all I can do — take it play by play and make the most of my opportunities. People I play against, they’ll realize again.”

Kareem Hunt: You’ll be Able to Tell Who Hasn’t Been Working

After returning to the active lineup following an eight-game suspension, Hunt finished last season with 179 rushing yards and 2 touchdowns. He also caught 37 balls out of the backfield for 285 yards.

If Hunt can show the upside he did In his first two seasons in head coach Kevin Stefanski’s run-heavy offense, he’ll be in for a payday. The Cleveland-native racked up 2,151 rushing yards and 833 receiving yards over his first two years in the league. He made the Pro Bowl in 2017 as the league’s leading rusher and was on pace for another strong season before being let go by Kansas City.

Hunt said he’s stayed in shape doing workouts in his basement on his Peloton bike, among other things. He knows during this uncertain time that those who lack work ethic will suffer.

.@Kareemhunt7 on @Browns_Daily: You're going to be able to tell who's been working out and who hasn't when we all report.

“It’s a crazy time right now. I never would have expected something like this — getting ready for the season and all the sports are shut down,” Hunt said. “I’m glad I had these last four years to really learn how to treat my body in the offseason. You are going to be able to tell who has been working and who hasn’t been working.” 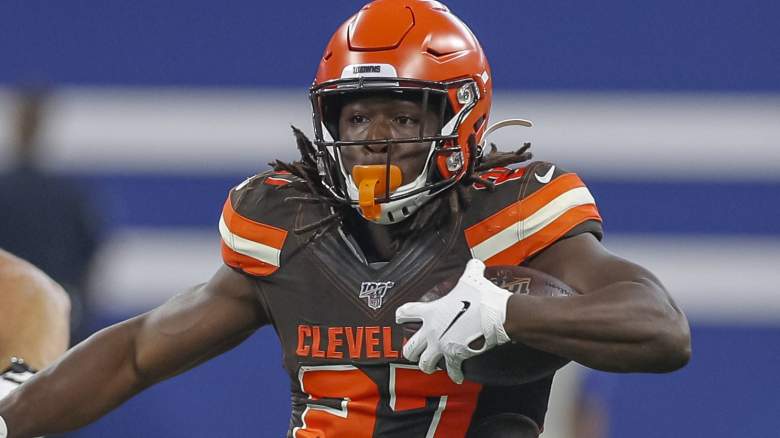 Hunt will be sharing the workload with Nick Chubb, who just missed out on the rushing title a season ago. Chubb finished with 1,494 yards and eight touchdowns.

“I see myself coming in and being a 1-2 — Nick and I just coming in and taking over the game every week,” Hunt said. That’s what I envision.

Both of us have a unique running style, tough runners. And I think we are both workhorses. I’ve never seen anything like this either. I’m excited to see how this season goes. I feel like we can go far.”

Browns quarterback Baker Mayfield said earlier this offseason that he wants the team to move in silence, rather than last year when a mountain of hype turned into a disappointing 6-10 campaign. Hunt is of the same mindset.

“I’d rather not be talked about and come in each and every week and it’s like, ‘The Browns won again, the Browns won again.’ When they see we winning, then they’ll start talking,” Hunt aid. “I feel like people are sleeping on our team, but I would too. We haven’t really done much lately.”

READ NEXT: Lakers Have Shown Interest in Trade for Bradley Beal