Both Nick Foles and Mitchell Trubisky spoke to the media for the first time from Halas Hall via Zoom Friday, and both quarterbacks for the Chicago Bears sounded confident and ready to go. While Trubisky has been trying to fix his footwork and mechanics, Foles has been trying to get settled amidst a sea of change: he just moved to a new city, he’s playing for a new team — and he has a newborn baby. Still, he’s adjusting quite well.

Foles discussed unfounded rumors he was planning to opt out this season, which he said was never a consideration for him. The veteran signal-caller said he and his wife Tori, who just gave birth to son Duke just under two months ago, have had lengthy discussions about playing this season, and Foles noted once he got to Halas Hall and saw the precautions the team was taking, his mind was put at ease.

Nick Foles says he had conversations with his wife and family about playing. Says it's been really impressive to see what the #Bears have in place at Halas Hall to make everyone feel safe.

Bears QB Nick Foles, who has a 3-year-old daughter and a 7-week-old son at home, said he and his wife “both felt strongly about pursuing playing this season. There was never a discussion about opting out.”

Foles’ Familiarity With Nagy’s Offense is a Definite Asset 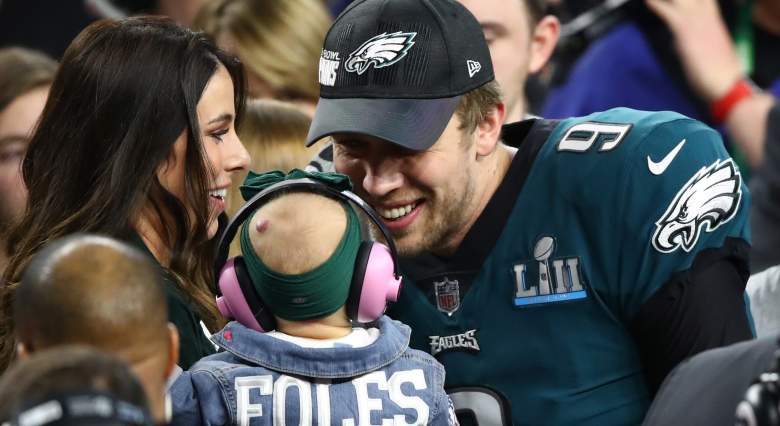 GettyNick Foles won a Super Bowl with the Eagles in an offense very similar to Matt Nagy’s.

The journeyman quarterback has played fo four different teams — Chicago will be his fifth. But being the new guy is nothing new for Foles. “I feel right at home. Which is huge,” Foles said of his familiarity and comfort with Matt Nagy’s offense.

Foles also seemed wholly comfortable in Halas Hall, as well as in Matt Nagy’s offense. “I love this offense,” Foles said. “I love the verbiage. I know what I can do in this offense. But all that stuff gives me is wisdom. Wisdom to go out there and help my teammates, to help Mitch, to help Tyler.”

It’s that supportive attitude right there that could very well endear Foles to both his teammates, and to fans.

Nick Foles Will Support Trubisky, Regardless Who Wins Starting Job

Foles also joked he may need some extra hand sanitizer around for all the high fives he’s ready to dole out in support of his teammates — and his closest competitor. “When [Mitch] makes a great throw, I’m going to be right there to slap him a five and then they’ll probably have to like sanitize our hands, but I’m going to do it. That’s part of this thing,” Foles said, adding: “Whatever the coaches say, that’s what’s best for the team, and then we roll as the Chicago Bears.”

#Bears QB Nick Foles: "When (Mitch Trubisky) makes a great throw, I’m going to be right there to slap him a five and then they’ll probably have to like sanitize our hands, but I’m going to do it. That’s part of this thing. It is a competition but we’re all on the same team."

It’s clear Foles is comfortable, but will that be enough to win the starting job? Nagy and Pace, who met with the media Wednesday, revealed that the competition between Trubisky and Foles would be collaboratively decided, and Nagy noted every single aspect of their performance is being evaluated.

“We’re evaluating those quarterbacks with every single play,” Nagy said. “Not just throw, but every single check that they make at the line of scrimmage, every bit of leadership that they show in and out of the huddle, how they react to a specific play in practice.”

If that holds true, Foles’ knowledge of the offense just may win him the starting job.