With World Cup qualifiers coming for Mexico, there are many doubts in terms of their current struggles to find a sense of rhythm, but that topic of conversation is shifted to its past when the greatest player to don the famous green jersey “reneged” playing for it.

When many are asked around to name a Mexican footballer, many will mention Hugo Sánchez. For many he is the best Mexican player in history, he tore it up in Europeand and became an ambassador at Real Madrid, he is considered one of the best strikers in history, but Hugo Sánchez never transcended in the World Cups, although that was apparently “the fault of the country where he was born”.

Despite the fact that historically he has been presumed to be a staunch (and at times borderline xenophobic) defender of Mexicans in football in all areas, assuring that he has the character, talent and mentality to be the best in the world, the truth is that Hugo Sánchez denied that for being Mexican he was denied winning a World Cup.

Sánchez said something that is considered unthinkable by asserting that he would have won a World Cup with any other country, but “unfortunately” he had to play with El Tri.

This was all part of a heated debate on ESPN Mexico. “If I had played in another National Team and not in Mexico, I would have won the World Cup, but I had to play with Mexico,” was the argument of Penta, who also argued that if his numbers are not as striking as those of others compatriots with the green shirt is because he never played the so-called “partidos moleros” (pointless friendlies). 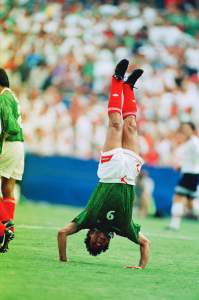 “Your time in the National Team was gray, really,” said journalist Rafael Puente replied to the historic scorer, who visibly annoyed him and demanded an explanation of why he brought that up to the subject and accused the exporter of “the provocative”, also referring to other Mexican journalists in the process.

Although he was one of the most influential players in Spanish football, he did not have as much influence on the national team. Saying that is also a bit unfair, but the track record was not that extensive. Currently, the Pentapichichi is still in the top ten scorers in eighth place with 29 goals. On the track record, he only has a Gold Cup that he could show off.

Mexico currently find themselves in third place with 14 points, level with Panama but with a better goal differential.  Should they drop points compared to Los Canaleros they find themselves in a position to drop to the intercontinental playoff spot.

These two teams will face off in this international date when they play over at Estadio Azteca on February 2.