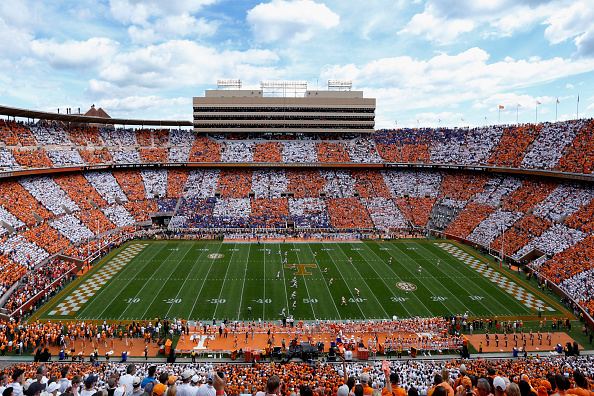 Well, that was fun. Along with the insanely good fandom from the University of Tennessee, which went unrewarded with a tough loss to Florida, an intense amount of Earth-shattering events occurred. Last weekend, what we here at Heavy.com have dubbed “Mulligan Saturday” the following completely insane things actually happened:

1) Katy Perry knocked my socks off (as I knew she would).

2) Four of the top six teams ranked in The Associated Press poll lost, and that happened only one other time in history. Stretch it out to five of eight, and that’s never happened in the history of ever. Repeat: THAT HAS NEVER HAPPENED.

3) Washington State QB Connor Halliday, had 734 passing yards — breaking the single-game records set by David Klingler (FBS, 716 yards) and Taylor Heinicke (Division I, 730) — and oh, by the way, he LOST 60-59 to California on a missed 19-yard field goal with 15 seconds left.

4) For the first time in history: Ole Miss and Mississippi State have both been ranked in the top 10, as of Monday.

5) Everyone freaked about about what this weekend meant for the rest of the season.

God, college football is so much fun. Only here’s the thing, as everyone goes apoplectic about last weekend: if everyone else around you does the same thing, that means it does not end your season. From the Thursday Oregon loss to the madness of Saturday, this past weekend was a mulligan. For everyone.

Bold prediction [that really isn’t that bold when you think about it]:
At least one of the teams that lost this past weekend will be in the Final Four. It’s just math. Too many good teams lost, there is no great team and four teams have to make the playoff. There are more “crazy” weekends to come, particularly because the Pac-12 and SEC West are so good. So, if anything, expect things to be murkier as things move forward. So let’s move forward.

Glance Game of the Weekend

The SEC East is confusing, clearly inferior to the SEC West and, yet, clearly in control of their own destiny with a very clear path to the Final Four. Both of these two teams, if they win out and win the SEC title game, are in the Final Four with the red carpet rolled out in front of them. It will be unquestioned, even though Missouri lost to Indiana, which makes less sense than the ending of St. Elsewhere. This is only a glance game because it looks so apparent that the SEC West will win the league, but as your day begins and you crack open that first beer, this game can be on in the background.

Haterade Game of the Weekend

Someone from the Big 12 will be in this playoff and, because Oklahoma pulled, frankly, an Oklahoma. While the gang in Norman could very easily find its way into the Final Four, as it stands now it’s one of these two. Except that they are in a steel cage death match this weekend. The loser of this game will not make the Final Four. That’s part of the reason it’s so compelling. You will see someone’s championship dreams shatter right before your eyes and if you are someone who truly enjoys that sort of thing, feel free to lap it up. If you’re someone who resents getting trolled by pretenders, watch this game after drinking in all the hype around both teams to see them inevitably disappoint you.

Reservation Games of the Weekend

So you have to figure it’s one of these teams coming out of the Pac-12, right? They’ve both lost, meaning Oregon has gotten the inevitable stubbing of their toe out of the way, and while Arizona is undefeated and has a clear path, no one on the East Coast — and certainly not me — has been able to stay up late enough to have a real feel for the team (which could not even matter since Arizona could easily lose to USC at home this weekend, surprising no one and finding themselves out of the conversation after their 15 seconds of fame) thus, we fall back on programs we know. The loser of this game is out, that much we should all agree on. But the winner of this game? Totally viable Final Four contender. Last weekend was a mulligan for everyone for a reason.

The State of Mississippi was the toast of College Football last weekend and this past week, and all of that can come crumbling down in one short trip to play Kenny Trill. They’ll be celebrating that win in Oxford for years to come — Mississippi, you may have heard, has a hard time escaping the past — and they deserve to feel good, but the hangover might very well be sharp. Texas A&M is a good football team and at home, and Ole Miss does not know what it feels like to be the hunted. It’s this game, much more than last week, that will test how good they truly are.

I don’t care what else is on your schedule this weekend: wedding, funeral, birth, asteroid hitting Planet Earth, make the time to watch this game. This is the most relevant Mississippi State has ever been. Ever. Auburn is going to get their best shot, and they’re going to get everyone’s best shot, but this is the team which poses the toughest matchup Gus Malzahn and company will face this year. Dak Prescott isn’t just good in Dan Mullen’s system, he’s the prototype. All of the hype you will hear about this game doesn’t even come close to doing justice what the atmosphere of Starkville will feel like this weekend. For that alone, you should watch. That this game has huge Final Four and Heisman implications, means that you should be watching it on your phone in church at the wedding you’re being forced to attend by inconsiderate people. Even if you’re the bride.

Fancy Writer Quote Of The Moment

Enjoy the weekend, the games, the weather and whatever pumpkin-infused beverage you’ll be drinking.

Read More
College Football
Katry Perry was awesome last week. What does the wild world of NCAA football have in store for us this week?