Michael Phelps checked himself in a rehab facility after facing his second DUI arrest in September. According to unverified sources, it seems Phelps was romantically involved with Taylor Lianne Chandler prior to his arrest.

In an interview with Radar Online, Chandler explained that while she is now a woman, she lived as a boy until she was a teenager.

“I was born with male genitalia with no testicles, but I also have a uterus and no ovaries.”

When she realized she identified more as a female, she changed her name to Paige Victoria Whitney and underwent surgery to begin the complete transition into being a woman.

2. Chandler Is 12 Years Older Than Phelps

Phelps might have a thing for older women, the 29 year-old didn’t mind dating a woman who was 41.

3. They Met On Tinder

It turns out rich and famous athletes needs the help of dating apps just like everybody else.

4. She Never Told Phelps About Her Past

In a recent post to her Facebook page (which has no pictures of the two together, but quite a few stock images of Phelps), Chandler spoke about her relationship with Phelps.

I am probably going to lose him because he is a brand that his team wants to protect and things since he went to rehab came to my attention that didn’t put him or our relationship in the best light. He is the first man I ever had intimacy with and felt comfortable and all woman. When he went to rehab I had to go through all this scrutiny and tabloid mess by myself. His team at Octagon abandoned me, whether he knows that or not I do not know.

5. Chandler Has Expressed Frustration On The Inaccuracies Being Portrayed In The Media About Being Intersex

“Two steps forward and 100 steps backwards. … In a world of educated people that had all the facts of intersex and what it means and then to sell a magazine say[ing] Michael Phelps is dating a MAN. I have cried now for an hour.”

Learn more about what it means to be intersex here. 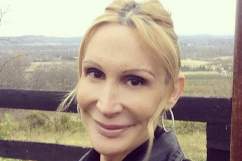