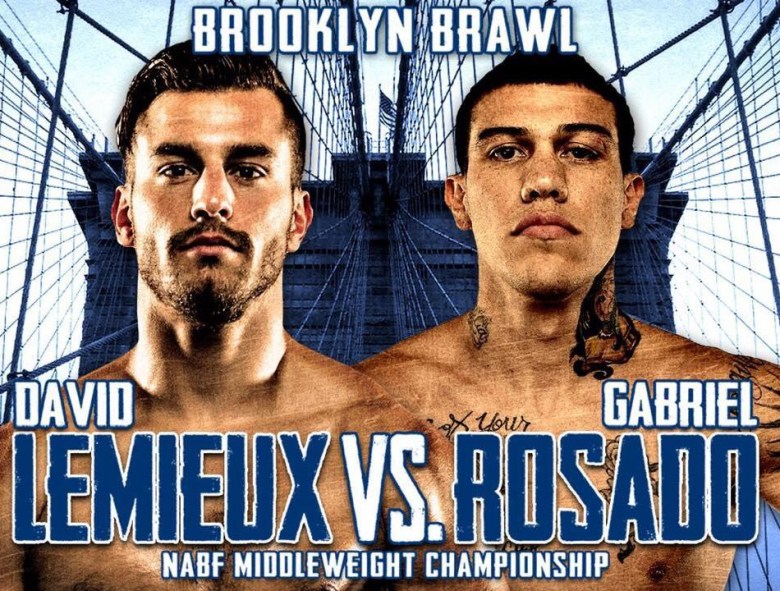 David Lemieux (32-2, 30 KOs) has built a career of inflicting punishment by fighting solely out of his native Quebec. This Saturday’s encounter with Gabe Rosado (21-8, 13 KOs) marks the Montreal mauler’s first bout south of the border.

Lemieux, 25 years old, has earned his reputation as a knockout artist, with 27 of his 30 stoppages coming within the first three rounds of the fight.

He was undefeated for 25 contests and was a rising star on the pro boxing scene before dropping two consecutive fights, first to Marco Antonio Rubio in April 2011, followed by a controversial loss to Joachim Alcine in December 2012. Since then Lemieux has been in a rebuilding phase, trying to get back to where he left off by winning his last seven fights since the defeats.

Not only is this Lemieux’s first fight outside of Canada (and his first HBO headliner), but in Gabriel Rosado he will find his biggest challenge to date. Getting past Rosado would be a good step in proving he is more than just a limited slugger, and in solidifying his name in the minds of international boxing fans.

“Nothing ever brought me down,” Lemieux said at a recent open workout. “I believe in destiny and I never quit and here I am with the best around me, you’ve just got to put in the time, the effort, the blood, the tears and the sweat. It’s all a dance and you’ve got know the right steps to get back in the ring. You’ve got be ready for it and willing to accept change.”

2. Gabriel Rosado is 0-4 Coming Into This Fight 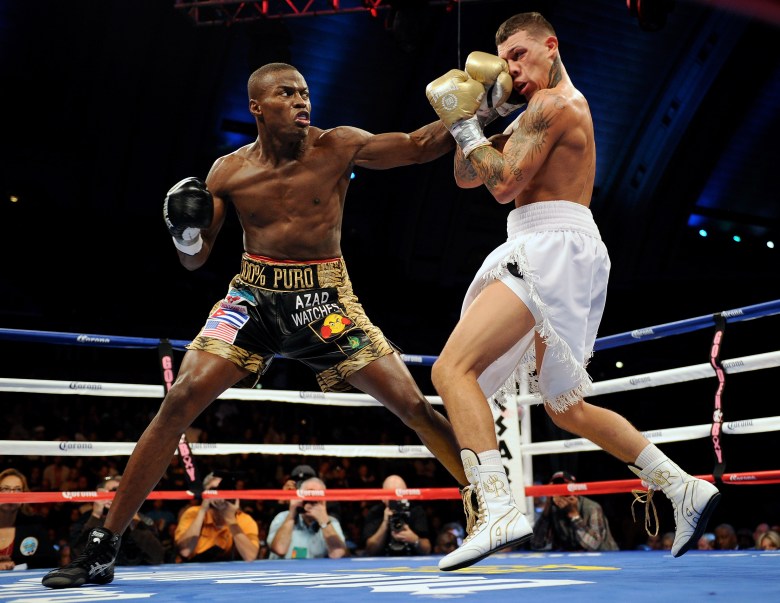 Gabriel Rosado, 28 years old, was also a promising up-and-comer before his career was sidetracked by a series of recent losses. Rosado’s slide began after his defeat at the hands of Gennady Golovkin in January 2013.

Rosado lost his next fight, against J’Leon Love, on the scorecards (that fight was eventually ruled a no-contest after J’Leon Love failed a drug test).  He next was defeated by TKO by Peter Quillin after a cut obtained over his left eye during his previous fight with Golovkin opened up beyond repair. And finally came his decision loss to undefeated Jermell Charlo in January of this year.

It is hard enough for a boxer’s reputation to recover after dropping four fights in a row, even more if Rosado makes it five on Saturday. An impressive victory over Lemieux could be the difference between staying relevant and landing a permanent residence in the fringe neighborhood of boxing’s ranking.

3. However, Rosado Competed (and Looked Terrific) on Big Knockout Boxing Earlier This Year

One win that is not reflected on Rosado’s boxing record is his impressive knockout win over Bryan Vera on Big Knockout Boxing in June.

Big Knockout Boxing is a new combat-sport format that is designed to increase engagement and in-fighting. A round 17-foot “pit” without ropes replaces the ring, keeping the fighters face to face with nowhere to run. Two-minute rounds keep the action brisk, and a space-age design is novel enough to draw in curious fans.

Still in the formative stages, BKB topped its first high-profile night by featuring Gabe Rosado and veteran Bryan Vera in the main event. Rosado boxed a brilliant fight, dropping Vera in the third round and knocking him out in the fifth.

“It’s not easy boxing in this little circle, but I made it happen,” Rosado said in the post-fight interview. “I’m really a boxer, and that’s what I do. My corner came up with a good game plan, and Vera’s a good fighter. But I wanted to put on a great performance and be an inspiration for people who came from the bottom like I did.”

4. Style Make Fights: The Slugger vs. The Boxer/Puncher

Saturday’s fight brings fans an interesting style match-up in which each of the fighters’ strengths and weaknesses complement the other’s.

David Lemieux is a thick-limbed slugger who carries devastating power in both hands. He is a very quick starter with a fan-pleasing style, coming out of the corner ready to macerate his opponent; and an excellent finisher, seemingly able to put away a show at will.

Lemieux makes every punch count, throwing with bad intentions and committing himself fully to every bomb. Relying on single punches or simply 1-2 or 2-3 combinations, he rarely throws more than three punches at a time. He works well in the middle of the ring or with his opponent against the ropes.

Defensively Lemieux relies on ducking and weaving to avoid getting hit and prefers not to take shots as he presses on his opponent. He has quick legs which allow him to control the distance and dart in to land punches, and dart back out to evade counters. Once he has his opponent hurt, he will dispense with the out-dart and press forward to pressure the rival into the ropes.

Lemieux’s endurance has been subject to question, especially after his losses to Marco Antonio Rubio and Joachim Alcine, who took the Canadian deep into the fight before earning their wins. Lemieux can sometimes take his time throwing his punches, allowing his opponents to get off first. As well, his jab can get lazy if he is not focused, leaving him open to counters.

Gabriel Rosado comes equipped with a complete game and a general ring-identity that he can adapt to his opponent.

Rosado is agile, can box from the outside, bang from the inside, and is not opposed to taking two shots to land one of his own. He is a good starter, but gets better as the fight goes on. Rosado is a good counterpuncher and has excellent timing. He sports a 71.5’ reach and a quick jab, able to double and triple it up.

Rosado has very good upper body and head movement and a dependable chin, as demonstrated in his fight against Gennady Golovkin, where he finished the fight with a mouthful of leather, but still standing.

However, the Golovkin fight, along with other wars against world-class opposition, has also led to world-class beatings. Rosado enters the ring shop-worn, and the scar tissue over his left eye is a constant reason for concern for his corner.

Rosado is an excellent boxer, but at times his movement can be exaggerated and he can find himself open or out of position. A good opponent will take advantage of this. And like Lemieux, Rosado’s hesitation to get off while looking for an opening gives his opponents opportunity to score. 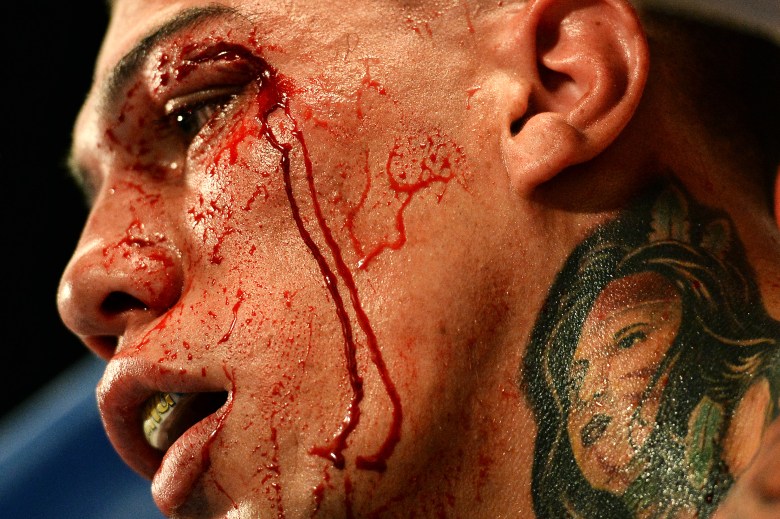 Saturday’s fight is Lemieux’s big chance to showcase his skills on the grand stage and before a nation-wide audience. He must apply constant pressure on Rosado and cut the ring off effectively, pushing Rosado into the ropes or corner and going to work on him.

A key for Lemieux will be getting inside and past Rosado’s educated jab. Once there, he should have no problem swarming the boxer and doling out punishment. Look for Lemieux to try to put on the hurt early in the fight and to finish off the affair in a timely manner.

Gabriel Rosado is an experienced, intelligent boxer– a Bernard Hopkins protégé. Rosado will have to use all of his ring savviness if he is to get past the Canadian.

“We are very well aware of Rosado’s tendencies and his capabilities and we did everything we had to in the gym to prepare for this fight,” Lemieux said. “Rosado’s got a lot on his plate.”

Rosado should use his jab to disrupt Lemieux’s rhythm and to keep him at bay.

Lemieux works best moving forward in a straight line. Gabriel should use his jab to back Lemieux up, and use his lateral movement to force the slugger to reset. This will buy Rosado time to get on the inside and land his own shots.

Look for Rosado to try to take the fight into the late rounds, where he feels more at home and where Lemieux has faltered in the past.

“In this fight I think the fans are going to see a lot more skill,” Rosado said. “I’m going to use my ring intelligence…you’re going to see speed, power. It’s going to be great.”

Fighting out of Philly/Jersey region, Gabriel Rosado will have plenty of supporters in his corner on Saturday. With Montreal only a few hours’ drive from the Big Apple, Lemieux will no doubt have his own contingency of backers cheering him on. The stage is set.

With both fighters putting plenty on the line, Saturday’s fight will be a fitting end to the boxing season in Brooklyn.