As Kevin Anderson prepares for the first major quarterfinal of his career, he'll have the relentless support of his wife Kelsey (née O'Neal). While the major quarterfinal appearance may be a new experience for the 29-year-old South African, though, there's nothing new about the presence of his wife, who has established herself as one of the most devoted significant others in the world of tennis. Kelsey, who met Kevin at the University of Illinois and married him in 2011, gave up a career as an accountant--just days after a promotion--to be a full-time part of her husband's team. Not only is she endlessly supportive--she estimates to be one of three ATP partners who travel to every tournament--but she's open and willing to give fans an insider's look into Tour life via her blog. An individual sport such as tennis, especially at the professional level, has the potential to create distance in relationships, but the opposite has been true for Kevin and Kelsey. Click through to see them in action. (Instagram/kelseyoanderson) 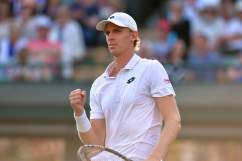 Read More
Tennis
Kelsey Anderson (née O'Neal) is more than just the wife to tennis player Kevin. She is an endlessly supportive fan and traveling member of his team.