Gregg Popovich will become the coach of USA Basketball after the 2016 Olympics. (Getty)

After short-lived speculation surrounding who would replace Mike Krzyzewski as the coach of USA Basketball, they’ve got their man.

Gregg Popovich will take over for Coach K after the 2016 Olympics, and will coach Team USA from 2017 until 2020. Krzyzewski will stay on as a special advisor to the team, and Colangelo will remain in his role as Managing Director.

Popovich will bring the same success to Team USA that he’s brought to the San Antonio Spurs. That’s not to say Team USA is struggling, as they are currently in the midst of a 63-game winning streak.

Here’s what you need to know about Team USA and Pop:

In his 15 full seasons as Spurs coach, Popovich has never missed the playoffs. (Getty)

Popovich will take over after the 2016 Summer Olympics in Rio, which begin in August. Then Krzyzewski will step back, and will assume an advisory role within USA Basketball. That gives Popovich plenty of time to prepare for his first major event, which would be FIBA World Cup Qualifiers.

Popovich gets a break due to a recent schedule change. The World Cup is being pushed from 2018 to 2019, allowing another year for teams to qualify and prepare. At the 2014 World Cup in Spain, Coach K led Team USA to their first-ever repeat as champions. Team USA cruised with a 9-0 record, defeating Serbia 129-92 in the championship game. 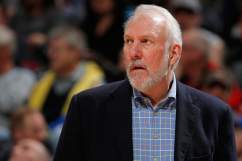 Gregg Popovich Age: How Old Is the Spurs Coach?

2. USA Has Been Unbeatable Under Krzyzewski

Since taking over as the coach in USA Basketball, Krzyzewski sparked an immediate turnaround. After a bronze medal finish at the 2004 Olympics, Jerry Colangelo hired Coach K to bring new life into USA Basketball. After being knocked out of the 2006 World Cup by Greece, Krzyzewski’s team won the bronze and never looked back. His record as Team USA coach is 75-1, including the current 63-game winning streak.

Here’s what Coach K had to say about the transition for USA Basketball:

“Gregg Popovich is the ideal choice to take over as head coach of the USA program. His long track record of success – both in terms of winning championships and creating a culture of excellence – are well documented and, rightfully so, he is considered among the very best coaches in the world. Because of his military background in which he selflessly served his country, coupled with his unique ability to bring out the best in his teams, this leadership appointment makes perfect sense. Undeniably, he will incorporate the highest of standards, which are unique to him, that will only enhance the USA Basketball program. I look forward to working with and learning from Gregg and Jerry Colangelo as they lead Team USA into the future.”

3. Popovich is Regarded as the NBA’s Best Coach

After 19 seasons as Spurs head coach, there aren’t many who compare to Pop. He’s a five-time NBA champion, and a three-time NBA Coach of the Year. Popovich, who will be 71 for the 2020 Olympics, has had 18 consecutive winning seasons as coach of the San Antonio Spurs. In a press release, Popovich said, “I will do my utmost to maintain the high standards of success, class and character established by Jerry, Coach K and the many players who have sacrificed their time on behalf of USA Basketball.”

As always, the biggest challenge for a Team USA coach will be the continued effort to get the NBA’s best players involved. Krzyzewski did a great job of that, leading to the team’s current dominant run. But after Paul George’s season-ending injury last summer, players may be more hesitant to dedicate their summers to international basketball.

4. It is Unknown Who Will Be on Pop’s Staff

The biggest change for Team USA will not just be the head coach, but the rest of the staff as well. Coach K’s bench is filled with some of basketball’s best minds, including Jim Boeheim, Tom Thibodeau, and Thunder assistant coach Monty Williams. Boeheim will most likely be gone, and it’ll be interesting to see who Popovich adds to his staff.

Popovich has surrounds himself with young, bright minds in San Antonio, so expect some unlikely names to join the bench. A heavy favorite is Brad Stevens, whose impressed in his two seasons as Celtics head coach. Another name could be Becky Hammon, who is on the Spurs staff and led the team to a Summer League title.

Gregg Popovich has some experience on the international stage, but has never been head coach of Team USA. (Getty)

This won’t be Popvich’s first time with Team USA, but his first as head coach. He has appeared on the bench as an assistant during the low point for USA Basketball, amassing a 29-7 record from 2012-2014. During that time he won two bronze medals, and won the gold at the 2003 FIBA Americas Championship. Popovich was first an assistant to George Karl, then to Larry Brown in 2004.

More recently, Popovich was the coach of Team Africa during the NBA Africa game. Popovich led Team Africa against Team World, ultimately losing 101-97. Africa, led by stars Luol Deng, Serge Ibaka and Giannis Antetokounmpo, led by 15 after three quarters but couldn’t hold on for the win.

Read More
Basketball, Olympics
One great replaces another, as Gregg Popovich has signed on to coach Team USA Basketball from 2017-2020.