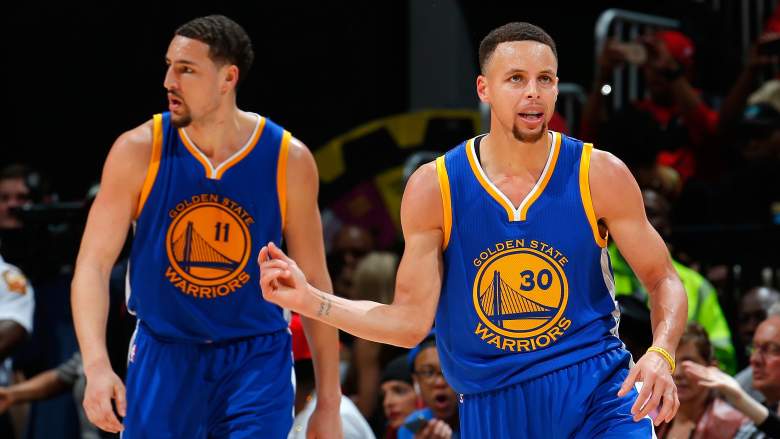 The Warriors continue their chase towards history against the Hawks. (Getty)

What can Steph Curry possibly do for an encore?

The soon-to-be two-time MVP somehow manages to continue to out-do himself, and his most recent performance–46 points, 12 three-pointers and a 35-foot overtime game-winner against the Thunder–may have just been the most spectacular in a long line of transcendent showings.

Before a rematch with Oklahoma City, the Golden State Warriors will take on the Atlanta Hawks, one of the East’s best squads.

Curry is questionable with an ankle injury he suffered against the Thunder, and if he isn’t able to go, it’ll be interesting to see how the Warriors fare without him.

The Dubs are 1-1 without Curry in the lineup this year, with a 23-point loss to the Dallas Mavericks and a four-point win against the Houston Rockets. Without the star point guard, much of the offense runs through Draymond Green (16 assists against the Rockets) and Klay Thompson (42 shot attempts combined in those two games), while Shaun Livingston likely steps into the starting lineup.

Atlanta, meanwhile, presents an intriguing defensive challenge. The Hawks are third in the NBA in defensive rating and first over the last 10 games. When these teams met a couple weeks ago, Curry and Thompson combined for 63 points but the Warriors “only” scored 102, which was their sixth-lowest output of the season.

Ultimately, with Curry’s looming injury and Atlanta’s defensive prowess, this is shaping up as a potentially difficult test in Golden State’s chase for 73 wins.

Then again, the game is being played at ORACLE, where the Dubs haven’t lost a regular season game since January of 2015. 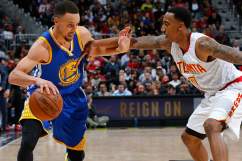 Read More
Atlanta Hawks, Basketball, Golden State Warriors, NBA
The Warriors return home to continue their chase for history against the Hawks. Find out when and where to watch the game.