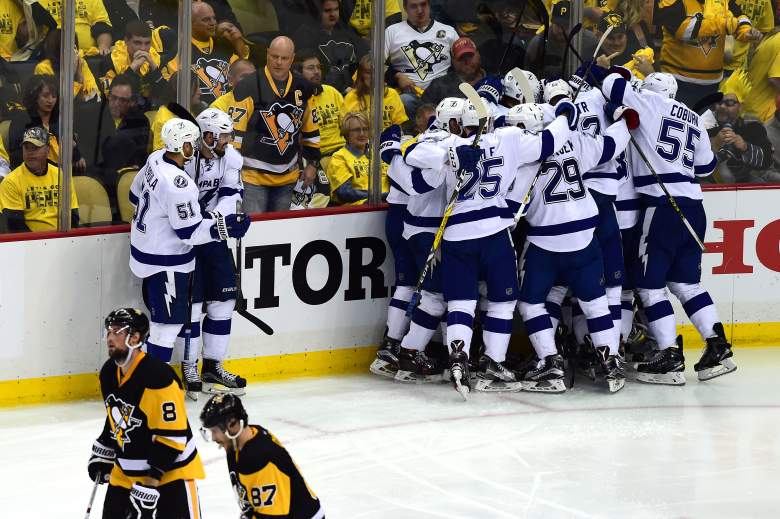 After an overtime win in Pittsburgh, the Lightning take the ice tonight one win away from the Finals. (Getty Images)

A hard fought series could come to a close tonight. The Tampa Bay Lightning, following a huge overtime win, can clinch a spot in the NHL Finals, their second in as many years.

The Pittsburgh Penguins are looking to bring this series back to Pittsburgh for Game 7, and they’re relying on rookie goalie Matt Murray to get them there.

The game airs on television tonight at 8 p.m. Eastern on NBC Sports, or NBCSN. In the event that you won’t be able to watch on your TV, fear not. There are still options for catching the game and streaming it on your computer or mobile device.

How to Watch Game 6 Online

To stream the game on your computer, you will need a cable subscription – be it your own cable username and password or someone else’s. NBC Sports has a streaming site of their own, called NBC Sports Live Extra. Simply put the username and password in, and you’re free to stream! This also allows you to watch clips or the full game later, if you can’t watch live. The site has an FAQ page for any other questions. You can watch both on the website or with an app if you use a Windows OS.

How to Watch Game 6 on Mobile

NBC Sports Live Extra is also available as an app. Apple enthusiasts can find it at the App Store, while Android users can find it in Google Play. Much like on the desktop version, a username and password for a cable subscription is required.

Read More
Hockey, NBC Sports Network, NHL
Tampa is one win away from another trip to the NHL Finals, with Pittsburgh looking to stay alive. Here's how you can watch.