Put it in the books, the Pittsburgh Penguins are the 2016 NHL Stanley Cup champions.

The Pens made beat the San Jose Sharks on their own ice, becoming kings of the NHL with a 3-2 series win.

And now you can commemorate the Penguins 4th Stanley Cup win with the newest Pittsburgh championship gear thanks to online sports retailers Fanatics and FansEdge.

All of the products on Fanatics and FansEdge are officially licensed and made of high quality materials. And not only do the sites carry Pittsburgh NHL Stanley Cup Finals apparel, but also have hundreds of other Pens items for men, women and children, including shirts, jerseys, jackets, hats, hoodies and collectible memorabilia.

Here are some of the newest Penguins NHL Champions items available right now:

The Pittsburgh Penguins are on top of the NHL once again. Sidney Crosby, Evgeni Malkin and Co. have won the 4th Stanley Cup championship in franchise history, and their first since 2009. Celebrate the Pens latest title with the newest Stanley Cup champions gear, including shirts, hats, hoodies and collectible memorabilia from Fanatics and FansEdge. Click on the link below to get brand new championship Penguins apparel. 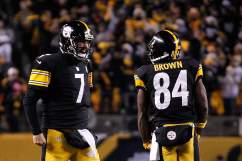 Get the same shirt the Penguins players were wearing on the ice after winning the 2016 Stanley Cup Finals right here. The Locker Room Flanker T-Shirt by ’47 is made of 60 percent cotton and 40 percent modal, and features a crew neck and screen print graphics.

The Stanley Cup Champions Locker Room Hat will let everyone know you pulling for the Penguins. The hat is a structured fit and features a high crown, curved bill and a snap back, so it’s one size fits most. The front of the hat is made of 100 percent polyester ottoman and the back is mesh.