The 2016 United States women's gymnastics Olympic team is set. After two days of trials in San Jose over the weekend, Simone Biles, Aly Raisman, Gabby Douglas, Laurie Hernandez and Madison Kocian were able to book their tickets to Rio. That quintet will hope to follow in the steps--or jumps, or spins--of the 2012 squad, which not only captured gold in the team competition for the first time since 1996, but also tallied four individual medals. Women's gymnastics is always one of the most popular events of the Olympics, as individuals like Mary Lou Retton, Carly Patterson, Shawn Johnson, Nastia Liukin and Douglas have become national sensations over the years due to their amalgam of athleticism and grace. You can expect this year's team to get a lot of attention during the next month, so you might as well get to know them now. You can click through the gallery to learn more about each Team USA member. (Getty) 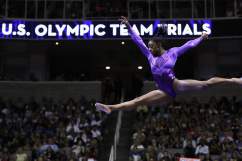