The 6-foot-6 athlete earned one gold medal at the 2008 Beijing Olympic Games, and a gold and a silver in the 2012 London Games.

Earlier this week in Rio, he won gold during the men's 4x100m freestyle relay alongside Ryan Held, Michael Phelps and Caeleb Dressel. It marked the Americans' first gold medal in this event in a major international meet since 2009, according to USA Today.

Throughout the 27-year-old swimmer's career, his family has been his support system. Click through the gallery to see, and learn more about Adrian's family. (Instagram) 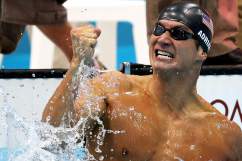 Nathan Adrian: The Photos You Need to See

Read More
2016 Olympics
American swimmer Nathan Adrian has credited the support of his family as a large key to his success. Click through the photos to learn more about his parents, and siblings.