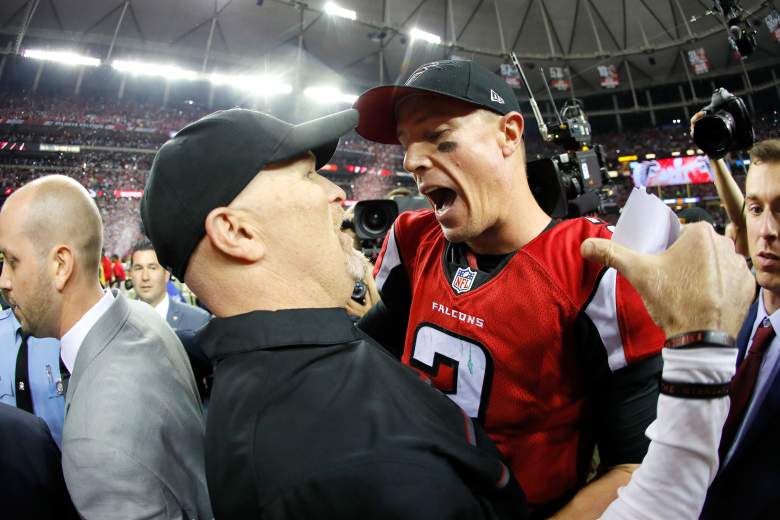 In a game matching two of the NFL’s best quarterbacks, Matt Ryan and the Atlanta Falcons dominated from start to finish as they defeated the Green Bay Packers in the NFC Championship Game, 44-21. With the victory the Falcons franchise will make its second Super Bowl appearance, with the New England Patriots being the opposition, on February 5.

Ryan threw for 392 yards and four touchdowns while also rushing for 23 yards and another score. Ryan wasn’t sacked on Sunday, with his offensive line keeping Green Bay’s quarterback pressures (and hits) to a minimum. Julio Jones led the way through the air, catching nine passes for 180 yards and two touchdowns, with Devonta Freeman rushing for a team-best 42 yards and Tevin Coleman adding 29 yards and a touchdown. Atlanta scored on its opening drive for the seventh consecutive game, and they turned two Green Bay turnovers into 14 points as they built a 31-0 lead.

Aaron Rodgers threw for 287 yards and three touchdowns on the day for the Packers, but they were unable to keep up with Atlanta’s prolific offense. Tight end Jared Cook caught seven passes for 78 yards and a touchdown for Green Bay, with Jordy Nelson and Randall Cobb catching six passes apiece. Hit hard by injuries throughout the season, Green Bay did not have enough to contend with the red-hot Falcons Sunday afternoon.

Below are some of the highlights from Sunday’s NFC Championship Game.

0:26 remaining, first quarter: After Green Bay’s first drive finished with a Mason Crosby missed field goal from 41 yards out, Atlanta went down the field and added to its lead. Matt Bryant’s 28-yard field goal capped a 12-play, 59-yard drive and gave Atlanta a 10-0 lead. Ryan completed five of eight passes on the drive.

7:24 remaining, second quarter: Matt Ryan scrambled into the end zone from 14 yards out to extend the Atlanta lead to 17-0. Ryan now has six rushing touchdowns in his NFL career, and his score capped a drive that went 80 yards in nine plays. Atlanta got the ball back on a Jalen Collins forced fumble/recovery that was declared a touchback by the officials.

itstravis: After that free time out, #Falcons take it away. Fox NFL Playoff: Packers at Fal… https://t.co/M2sz1IIgf2 pic.twitter.com/iIpGhJ2LBp

0:03 remaining, second quarter: Ryan and Jones connect on a back shoulder fade from five yards out to give the Falcons a 24-0 lead. A Ricardo Allen interception of an Aaron Rodgers pass gave Atlanta possession of the ball with 1:50 remaining in the half, and the Falcons drove 68 yards in nine plays to move ahead by three scores. Green Bay gets the football to start the second half.

13:51 remaining, third quarter: After a Green Bay three and out, it took Atlanta less than a minute to put more points on the board. Despite being held Jones got open for a pass from Ryan, and two broken tackles later the Alabama product was in the end zone. Jones’ touchdown reception was 73 yards long, with Atlanta’s “drive” consisting of two plays for 75 yards.

9:20 remaining, third quarter: Green Bay finally gets on the scoreboard, going 73 yards in 11 plays to pull to within 24 at 31-7. Rodgers and Davante Adams connected on a two-yard pass to end the drive, but tight end Jared Cook was the preferred pass catcher on the drive. Cook caught four passes for 54 yards on the drive, with a long of 26. Running back Ty Montgomery left the game with a rib injury and is questionable to return.

3:28 remaining, third quarter: Atlanta answered Green Bay’s first score of the game with yet another scoring drive, going 75 yards in eight plays to take a 37-7 lead. Ryan’s three-yard pass to Devonta Freeman capped the drive, with video review showing that Freeman did managed to get the ball over the goal line while possessing the ball simultaneously with Green Bay defensive back Morgan Burnett. Ryan has now thrown for 371 yards and four touchdown passes on the day.

0:38 remaining, third quarter: The Packers answered with another touchdown drive, with Rodgers hitting Jordy Nelson from three yards out. Green Bay was successful in its two-point conversion attempt, but their onside kick was recovered by Atlanta’s Mohamed Sanu Sr. Green Bay went 75 yards in nine plays to cut the deficit to 22 points.

12:07 remaining, fourth quarter: The Falcons get back into the end zone, with Coleman’s three-yard run extending the lead to 44-15. Atlanta needed to go just 33 yards on the seven-play drive after recovering Green Bay’s onside kick following a Packers touchdown and two-point conversion that made the score 37-15 at the time.

6:43 remaining, fourth quarter: Green Bay scores its third touchdown of the second half, with Cook catching a one-yard pass from Rodgers to make the score 44-21. Green Bay’s two-point conversion attempt was unsuccessful, as the Falcons tackled running back Christine Michael short of the goal line. 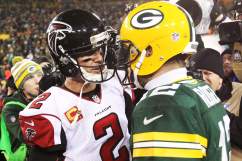 Aaron Rodgers vs. Matt Ryan: Who has More Career Wins? 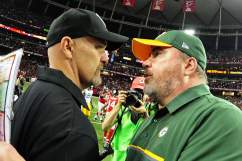