Olivia Culpo has been dating Miami Dolphins wide receiver Danny Amendola since early 2016. Over the past two years, they have spent a lot of time together. Culpo and Amendola have been on a few memorable vacations, most recently enjoying a Patriots bye week in Bermuda. They have also spent a great deal of time in Rhode Island with Culpo’s family.

On March 23, Amendola unfollowed Culpo on Instagram, leaving no trace of their relationship on his account. Culpo, however, still follows Amendola and has some recent photos of them together, but rumors of a split are plentiful.

1. Culpo Started Speculation About Her Relationship with Amendola on Snapchat

everything about this … ❤️

Culpo’s relationship with Amendola went public in February 2016 when Barstool Sports spotted a shirtless man wearing a Patriots helmet in a photo posted on Culpo’s Snapchat. She had also posted a photo of herself wearing a Patriots helmet, which got people talking. It didn’t take long for the internet to piece things together. Their new romance was pretty much solidified when a Barstool Sports reader noticed that Amendola was the only Patriots player whom Culpo followed on Twitter.

In the months that followed, Culpo began sharing more photos of her and her guy. A trip to Las Vegas sealed the deal, as Culpo posted a Boomerang of the two dancing together.

And, as if there was any speculation over the status of their relationship, Culpo put it to bed on February 3. She posted a photo of the two kissing before Amendola’s big Super Bowl game in Houston — and another of the two celebrating the Patriots win on the field. You can see both of those photos below.

Houston today to see this ??? in my life. Can't wait to cheer him on this weekend ❤ I love @dannyamendola (he is instagram-less but I guess I can still tag ?)

Culpo was on-hand at the Patriots ring ceremony, supporting her main squeeze at the event held at owner Robert Kraft’s home. Check out a picture of the two on the way to the soiree below.

Over the past several months, Culpo’s Instagram has been regularly filled with photos of her and her man. Whether they are on vacation together (they’ve traveled to Bimini and Bermuda this year), or are just enjoying some downtime in Rhode Island, the two are no longer shy about sharing their love with the world.

2. She Recently Opened a Restaurant in Rhode Island with Her Family

Culpo might be obsessed with fashion (and the Patriots), but there is also another love that is very close to her heart: food. This summer, Culpo expanded her resume by opening a restaurant with her family in her home state of Rhode Island.

The Back 40 opened in North Kingston in August. The eatery features American comfort food including hamburgers and fried chicken. There are also some New England favorites on the menu like a lobster roll and local roasted oysters.

“When I look at a meal or a plate of food, for me it’s the passion of how those flavors come together, the creation of it, seasonal fresh produce and dishes for different occasions—all those aspects of food are so valuable. It’s like putting together a beautiful outfit,” Culpo told Boston Common Magazine back in February.

The decision for Culpo to break into the restaurant business was a pretty easy one. Her family — including her father, Peter Culpo, and her cousin, Joshua Culpo — aren’t strangers to the industry. Josh owns and operates popular eatery Lulu’s located in Allston, Massachusetts, while Peter owns The Hill Tavern in Beacon Hill and Woody’s Grill and Tap in Fenway, to name a few.

“[Olivia is] in a position now with where she’s advanced in the last few years that she wants to diversify her revenue stream. Putting the deal together, we felt that bringing her in would be a good opportunity for her,” Josh Culpo told the Providence Journal in January 2016.

3. She Began Modeling as a Teenager, Recently Partnered with Cartier & Is a Brand Ambassador for ‘Pencils of Promise’

Culpo started her career in the modeling industry when she was a teenager. She inked a deal with Maggie Inc., and quickly got a lot of attention.

“She was a natural in front of the camera from the start, and clients began responding to her right away. She was a consummate pro, running around the city to castings and shoots in between classes, always approaching each modeling opportunity with the same enthusiasm and energy, while still maintaining a full class load and keeping her grades up. I always say that professionalism and personality are more important than looks in this business, and she had both in spades,” Robert Casey, Maggie Inc. president, told Boston Common Magazine.

Her modeling career was off to a great start and Culpo decided to get into pageantry. In 2012, the brunette beauty won the coveted Miss USA title. Culpo kept up with her education despite her budding career in the industry. In fact, she was attending Boston University when she became Miss USA. She graduated from the school two years later.

Now, Culpo seems to have the world at her fingertips. Earlier this year, Culpo announced that she had partnered with Cartier.

“So happy to be working w @cartier. I’ve always been such a fan of this iconic brand and I’m in love with these new stackable bracelets!!!! #daretodeclare #LOVEbracelet,” she wrote on Instagram.

Over the years, Culpo has also been in a couple of movies. Her most recent film was American Satan in which she played the role of Gretchen. She also had a small part in the romantic-comedy, The Other Woman. Culpo recently finished filming Reprisal and will soon start filming Tired Lungs, according to her IMDb page.

And that’s not all.

“She is also a brand ambassador for Pencils [of] Promise, which builds schools in underdeveloped communities in Guatemala … In the past three years, she has been the face of clothing, handbags, and cosmetics for a spate of brands including L’Oreal and Kipling, and currently represents Rampage clothing and GHD hair products,” reports Boston Common Magazine.

Culpo won the Miss Rhode Island crown while wearing a $20 dress she rented from Rent The Runway.

“My first pageant was [Miss Rhode Island] last October…I was studying acting in college, and I figured [pageants] would help my stage performance and my ability to perform for others, so I just went for it. My parents didn’t think it was a good idea,” she told Us Weekly in 2012. “And I ended up getting my dress the night before. It was a $20 Rent-the-Runway gown that was too short [and had] a hole in the back of it,” she added.

As she told the Las Vegas Sun, Culpo said that her story showed that winning the pageant isn’t just about looking the best.

“Then, I end up winning Miss Rhode Island, and then Miss USA, and now Miss Universe, and I love that story and love being able to tell it because it is not about being the most glamorous, or wearing the most expensive dress; it is just about being yourself and working hard and being optimistic,” she told the Las Vegas Sun.

In an interview with Ocean Drive, Culpo said she was “really chubby” as a little girl.

“After my crazy growth spurt, I looked like a completely different person,” Culpo told the outlet. “As the years went on, I went to Boston University and studied communications and acting. A lot of the people that I looked up to were actually, surprisingly enough, women who had gotten their start in pageants, like Halle Berry and Giuliana Rancic or Maria Menounos.”

At the 2013 Miss USA competition, Culpo met singer Nick Jonas and the two dated until June 2015. While they were together, Jonas had a big hit with “Jealous” and she appeared in the video, playing a cello in a bikini.

ABC News notes that Culpo, whose parents are also musicians, started playing the cello in second grade. She’s played with the Boston Symphony Orchestra and other orchestras in Rhode Island. She also attended the Brevard Music Center in North Carolina. She even performed at Carnegie Hall.

When she won Miss Universe 2012, Culpo’s father told the Associated Press that she was the “nerdiest” of her siblings. She is the middle of five children.

In an interview with Elle, Culpo agreed with her dad that she was a band camp geek. But she said that helped her become a beauty queen.

“I think there’s a lot from my posture related to the cello,” she told Elle. “It definitely made my arms and back stronger. To this day, I can tell that one arm is more muscular than the other because it’s the arm I use to hold up my instrument. And wheeling that thing around was great for muscle tone!”

Jonas told OUT Magazine in May 2016 that his new album, Last Year Was Complicated, was about his breakup with Culpo.

“With this one I made a real point to tell stories as honestly as I could,” Jonas told OUT. “It became very clear what it was going to be about, after the breakup. I just dove in headfirst and wrote about all of it. I think it was the most meaningful relationship I’ve ever been in, and it was the longest.”

“Tim and Olivia are dating but trying to keep out of the public eye as much as they can,” a source told E! News at the time. “Olivia had a hard time after the break up with Nick Jonas but took time for herself and focused on work and is in a great place now.”

However, on November 26, 2015, The New York Daily News reported that Culpo and Tebow broke up because Tebow won’t have sex before marriage. But a source later told E! News that this had
nothing to do with their split.

E! News’ source claimed that they were never really serious and are still friends. 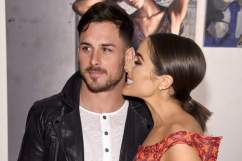