Every family has a story to tell.. Welcome to ours

Deshone Kizer’s life over the last few years has been one of transition. He transitioned from being Notre Dame’s backup quarterback to the starting role. Now, he will go from a college offense to learning the ropes as an NFL quarterback.

The one thing that has been consistent has been his family who have supported him the entire way. His parents, Mindy and Derek, anchor the family. DeShone’s brother, Dayven and sister, Maelyn, help him stay grounded. Heading into the NFL Draft, DeShone’s landing spot is wide open, but his family will be there to support him wherever he ends up.

Get to know the Kizer family.

The coolest cat of them all, Coach Dad

“He knows where a guy is open when the guy doesn’t know he’s open,” Welling told ESPN. “DeShone was like a miniature Magic Johnson. Now, he wasn’t 6-8 like Magic was, but he had peripheral vision and the ability to find open guys, and it was really uncanny because I had never seen anything like that before…you have summers where everybody wants you to do summer activities, you really don’t have time for player development like DeShone really needed. If he had gotten that, I have no reason to believe that he couldn’t have been recruited by the Big Ten, ACC or Big East.”

2. DeShone’s Parents Told Him He Would Either Enlist in the Military or Go to College on an Athletic Scholarship 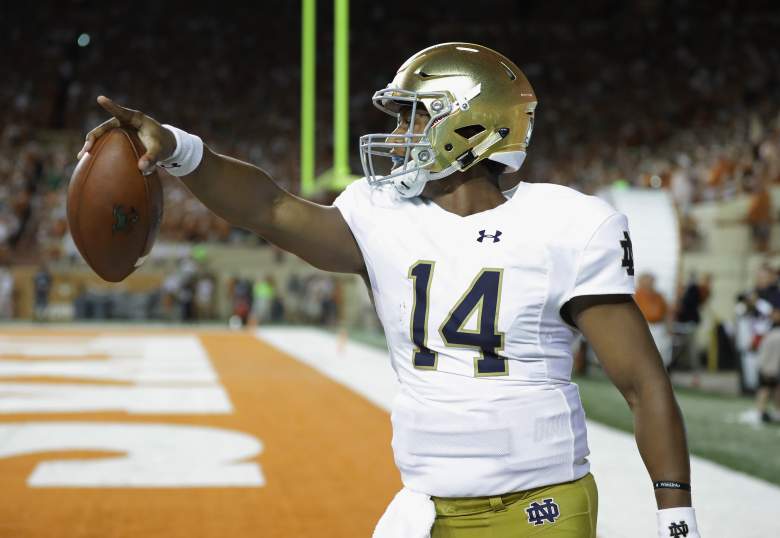 DeShone Kizer is looking to embrace the challenge of becoming an NFL quarterback. (Getty)

DeShone’s father has a very direct parenting style. Years before high school, Derek told his son they would not be able to pay for college for him. If he wanted to go to college, he would either have to enlist in the military or earn an athletic scholarship somewhere.

“The way that my dad parented me was everything was geared toward getting yourself into college and not paying a dime to do it,” DeShone told Sports Illustrated. “I knew I didn’t want to shoot anyone, and I don’t want to get shot.”

The couple wanted their son to go to college but did not have the means to make it happen. They did pay for DeShone to go to a private high school (Central High School) in Toledo, Ohio. According to 247 Sports, he was a four-star recruit coming out of Central.

3. DeShone’s Parents Were at a Surprise Birthday Party During His First Game Action at Notre Dame 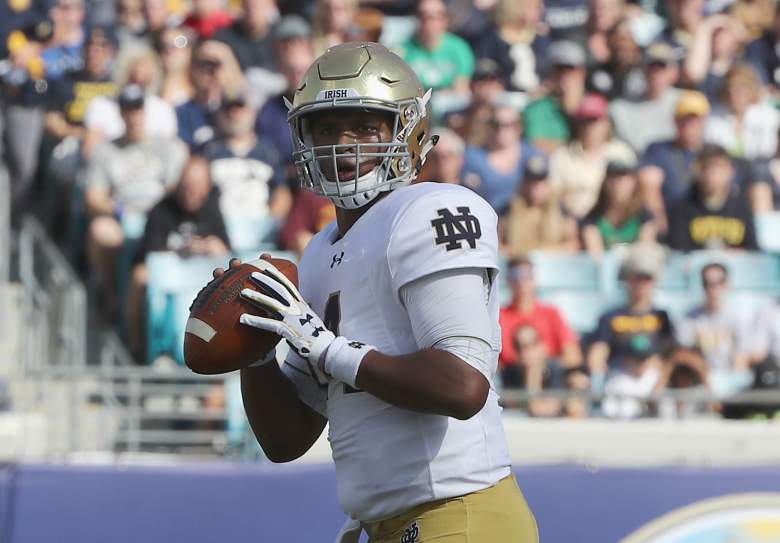 DeShone Kizer is headed to the NFL. (Getty)

“I didn’t even notice and somebody told me that the starting quarterback went down, and DeShone was warming up. From there it was like, ‘Oh, my goodness.’ My heart raced until the end of the game. Everybody at the party was watching the TV and cheering, and hoping for the best,” Derek told BCSN.

DeShone has a younger brother and sister. Both siblings are in high school and have not bought into the stardom of their older brother. Mindy explained to UND.com that his two siblings keep him grounded.

“It’s no big deal to them. I want them to know how big it is and they say, ‘Yes, Mom. we know.’ It’s been a gradual uphill thing like this since he got to high school–going to state in basketball as a freshman, then winning the state title in football. So they think this [going to Notre Dame] is just the next step,” Mindy told UND.com.

5. DeShone Is From Toledo, Ohio

As a four-star recruit coming out of Central Catholic in Toledo, Ohio, DeShone had plenty of offers. Some of the top schools to pursue DeShone included Alabama, LSU, Michigan State and Penn State.

Ultimately, DeShone chose to go to Notre Dame after being blown away on his official visit. DeShone spoke with the Toledo Blade shortly after making his decision.

“I was thinking of going to LSU this Friday but after going to Notre Dame we figured that a trip to LSU would be nothing but pointless time, because we all looked at each other after that visit and said that there’s no better place in the nation that we could possibly be,” DeShone told the Toledo Blade.