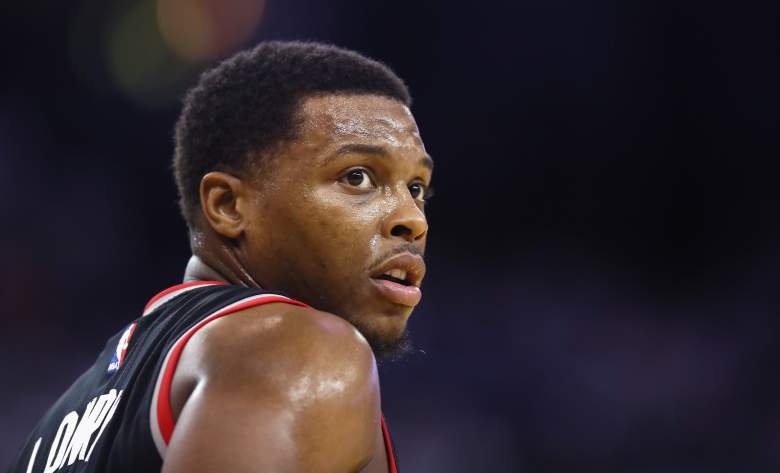 Kyle Lowry on the court during a game against the Golden State Warriors a on December 28, 2016 in Oakland, California. (Getty)

31-year-old Kyle Lowry is a point guard for the Toronto Raptors. But exactly how long does his contract with the Raptors last? And how much is he currently getting paid per year?

Lowry is currently on a four-year contract with the Toronto Raptors which began in July 2014 and extends into July 2018, according to ESPN.

The four-year contract that he signed in 2014 was worth $48 million, meaning he gets paid $12 million per year playing for the Toronto Raptors.

Although he’s on contract until 2018, Lowry can opt out this summer, and that’s reportedly what he plans to do. According to Yahoo Sports, Lowry is hoping to opt out and then resign to the Toronto Raptors with a larger salary.

“If you’re that franchise’s guy, and you’re the guy that they’ve been rolling with, and you’ve given that franchise everything you have, yeah, I think [the talks] should be easy,” Lowry told Yahoo last year. “I think it should be a situation where a guy shouldn’t have to talk to another team. DeMar didn’t have the chance to talk to another team…For me, I think that at 12:01 a.m. on July 1 – something should be close. If not, I’m open to seeing what else is out there.”

In that interview, Lowry makes reference to DeMar DeRozan, who is by far the highest-paid person in the Toronto Raptors. In 2016, DeMar DeRozan signed a five-year, $139 million deal with the company. This was the second largest contract in the history of the NBA, with the largest being Damian Lillard’s five-year, $150 million deal with the Portland Trail Blazers, according to Forbes.

Several other players on the Toronto Raptors are currently making more money than Kyle Lowry, including Jonas Valanciunas, who is making $15 million per year, and DeMarre Carroll, who makes $14 million.

Read More
Basketball, NBA, NBA Playoffs
Kyle Lowry is a point guard for the Toronto Raptors. But how long does his contract with the Raptors last? And how much is he currently getting paid per year?