As China prepares for the 2018 Winter Olympics, Jin Boyang will compete alongside a star-studded Chinese squad for the 2017 Cup of China Grand Prix, scheduled ­November 3-5 in Beijing.

Here’s more on the 20-year-old figure skater’s career and background.

Boyang’s passion for skating was sparked when his mom took him to an ice show by Xue Shen & Hongbo Zhao in Harbin.

“After I watched that show, I started to develop interest in figure skating,” Boyang explained in an interview with ISU. “But it was during the summer and there was no ice around, so I didn’t start skating at that time.

“It wasn’t until I became seven and a half years old that I skated on the ice for the first time. Same as Wenjing Sui, my first coach was coach Wang (Junxiang); he was the coach of all our current coaches.”

Boyang, who showed natural talent early on, said he wanted to competitively train by second grade.

“I started to show some talents from that time, and my mom firmly believed that I would be able to do well if I continue to skate,” he said.

Boyang’s parents initially had some concerns when Boyang wanted to become a serious competitor. As former athletes of middle to long-distance running themselves, they knew how difficult competitive training can be.

“At the beginning they indeed opposed the idea, especially I was pretty good at study in school at that time,” he explained in an ISU interview. “But since the second year in primary school my talents started to stand out, so they started to support me as well.”

Once Boyang’s parents saw his natural talent combined with his drive, they supported their son’s decision. 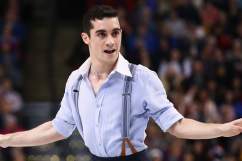 3. Boyang Is the First Skater to Land a Quad Lutz-Triple Toe Loop

Boyang is the first skater to complete a quadruple Lutz-triple toe loop combination, which he did at the Grand Prix Cup of China in early November 2015.

The Chinese figure skater performed a total of six quads. He went on to claim silver at that competition.

“I didn’t get my jumps from the beginning. Actually I progressed quite slow, but finally started to do well in jumps,” Boyang said in a recent interview.

“When I was little, I was showing talents in dance movements.”

Boyang went on to explain that jump execution is as mental as it is physical.

At the 2016 Four Continents Championships, he became the first skater to cleanly land six quads at an ISU competition and perform three different quads in a single program (lutz, salchow and toe).

Boyang, who is often referred to as the “quad king,” is also the first skater to cleanly land four quad jumps in a free skate.

Boyang’s breakout season came when he made his debut on the senior level in the 2015-16 season. He won silver medals at both of his Grand Prix assignments and qualified for the Grand Prix Final. He finished in fifth place at the Final, but continued his season by winning another silver at the Four Continents Championships.

Boyang became the first male skater from China to win a medal at the 2016 World Figure Skating Championships when he took home a bronze.

He repeated as the 2017 Worlds bronze medalist in Helsinki— achieving new personal bests in his short, free, and overall combined total scores.

5. Off the Ice, He Enjoys Spending Time With His Pets

When Boyang isn’t training, he has a few other hobbies which include playing with radio-controlled model cars and planes.

“I like things that fly in the sky, things that run on the earth, and things that swim in the water,” he explained to ISU. “I like pets, radio control vehicles like model planes and cars, earphones, Hi-Fi, etc. I like to play with almost everything that you can play with.”