Houston Astros shortstop Carlos Correa asked his girlfriend to marry him after winning the World Series on Wednesday.

What’s better than winning the World Series? For Houston Astros shortstop Carlos Correa, it was hearing his longtime girlfriend say she wanted to be with him for the rest of his life.

After celebrating the biggest moment of his life thus far on the Dodger Stadium field, Correa went to one knee and asked longtime girlfriend Daniella Rodriguez to marry him. And it all happened on live TV.

Correa, 23, was getting interviewed by Fox after the victory and segued flawlessly into the proposal. 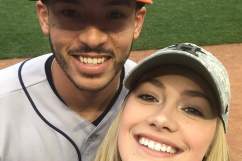 The Astros capped off Houston’s first-ever World Series championship with a 5-1 victory over the Los Angeles Dodgers on Wednesday. They won the title in Game 7 in what will be remembered as one of the best World Series’ ever.

Correa went 1-for-4 in the game and finished with 8 hits in the series. After the proposal during an interview with ESPN, Correa said he’d been thinking about proposing for “months,” but was waiting for the right opportunity to do it. When it seemed that the Astros would win, he said he told a member of the Astros’ staff during the 9th inning to get the ring from the clubhouse.

“I’m like, ‘I don’t want to jinx anything, but if we get the three outs, please bring me the ring because I’m gonna get engaged in the ballpark,'” Correa said, adding it was surreal seeing Rodriguez’s reaction. “She’s like crying and balling out, it was a great feeling. She was not expecting that at all.”

Rodriguez is a former Miss Texas USA. It’s not clear exactly when the two started dating, but Rodriguez once threw out the first pitch of an Astros game. She frequently posts photos of her and Correa together before and after games and whenever he has an off day.

Correa is from Puerto Rico and made his MLB debut in 2015, winning the American League Rookie of the Year award. He was born in Ponce, Puerto Rico and lived with his family on a low income in a small home in a fishing village. He was introduced to baseball at a very young age, playing catch in an alley close to his house. Soon enough, he was enrolled in a youth league and displayed his incredible ability. By his teenage years, he caught the eyes of MLB scouts.

Correa was the first selection of the 2012 MLB Draft by the Astros and was an honor roll graduate of the Puerto Rico Baseball Academy.

In Correa’s first MLB game, he went 1-for-4 with an RBI single and hit his first professional home run the next day. On July 5, 2015, he became the first player since 1914 to have five games with a minimum of three hits and a homer in 25 plate appearances since debuting. He finished his incredible rookie season with a .279 batting average, 108 hits, 68 RBIs and 22 home rums.

Correa followed up his inaugural MLB season by impressing even more. During the 2016 season, he had a career-best 96 RBIs to go along with his .274 batting average.