Getty Former Major League pitcher Roy Halladay talks to the media prior to the game between the New York Mets and Philadelphia Phillies on August 8, 2014 at Citizens Bank Park in Philadelphia.

Former Major League Baseball pitcher Roy “Doc” Halladay was identified as the person who died in a plane crash over the Gulf of Mexico on Tuesday. The Pasco County Sheriff’s Office announced at a press conference regarding the crash that Halladay was the victim and expressed its condolences to his family.

The deceased has been confirmed as Roy Doc Halladay.

We are deeply saddened by the loss of this amazing and generous individual. Our hearts go out to Roy and his family.

Halladay, 40, was one of the most successful pitchers in the modern era with a career that stretched 16 years and saw him play for the Toronto Blue Jays and the Philadelphia Phillies. He’s survived by his two children and wife, Brandy.

Halladay threw two no-hitters in his career and will be remembered for his continued philanthropy. After he announced his retirement in 2013, he obtained his pilot’s license and started flying planes while also coaching his children’s baseball teams.

Here’s what you need to know about Halladay and his tragic death:

Reports surfaced on social media during the afternoon that there was a plane crash over the Gulf of Mexico. The Pasco County Sheriff’s Office responded to the scene of the downed plan in the Gulf, and stated the plane was a “small, personal plane.” They initially didn’t confirm the identity of those on board or the owner of the plane, but said “one body was located” and the recovery team executed a search of the plane and around it.

Our Swift Water Response Team and Marine Unit responding to the downed plane in the Gulf. pic.twitter.com/xwWHU5S7uf

Multiple media outlets tracked the tag number of the plane and determined it was owned by Halladay.

Roy Halladay next to his plane and photo of crashed plane have same tags. No confirmation on identity of person dead. pic.twitter.com/D5bfhASZC1

The sheriff’s department identified him as the victim at a later press conference, saying he spent a lot of time with the law enforcement officials during his retirement from baseball.

Roy Doc Halladay was at our Fishing for Families tournament last Friday. We are blessed to have known this incredible friend. 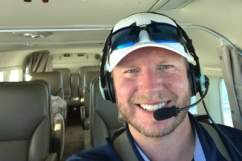 2. He Became an Aviation Enthusiast After his Retirement From Baseball

Halladay retired from the MLB in 2013 and took up aviation and boating as hobbies. He said that his father was a corporate pilot and he grew up around airplanes, which inspired him to start flying.

“In the air or on the water!” his Twitter bio read, with a photo of him piloting an aircraft as his profile picture.

Many of his social media posts involved him flying with friends and family members, and one in particular, posted October 31, showed him standing in front of the plane that crashed into the Gulf.

I have dreamed about owning a A5 since I retired! Real life is better then my dreams!! Thx Kirk & everyone @ICONAircraft pic.twitter.com/wkk6TtjAY4

An October 12 press release by ICON Aircraft said that it delivered the first Model Year 2018 (MY18) A5 to Halladay, who’s been a “regular ICON A5 renter” for years. That was the plane which ended up crashing into the Gulf, law enforcement officials said.

Pitcher Roy Halladay Dies After Crashing ICON A5 Plane He Promoted in October (File)Credit: ICON Aircraft To download this video for news use you MUST go to: newswire.storyful.com To obtain a Storyful subscription, contact sales@storyful.com. This video has been uploaded for use by Storyful's subscription clients with the permission of the content owner. Clients can see and search Storyful Licensed Videos here: newswire.storyful.com2017-11-07T22:59:49.000Z

“I’ve been dreaming about flying since I was a boy but was only able to become a pilot once I retired from baseball,” Halladay said in the release. “I’ve owned other aircraft, but no aircraft embodies the adventure or captured the dream of flying like the A5. Not only is it the safest and easiest aircraft I’ve ever flown, it is hands-down the most fun. The beaches, lakes, and waterways my family and I get to explore around Florida are mind-blowing. Words don’t do justice to what the A5 allows us to experience. Even my wife, who used to be uncomfortable in small planes, now asks where we should take the A5 for the weekend. I’m honored to own the first A5 Founders Edition.”

I love the Players & Parents of our Florida Burn! They keep proving why they’re the best team on the field but more important the classiest! pic.twitter.com/4agAeCO4wY

3. Halladay Is Survived by His 2 Children & Wife

Halladay lived in Tarpon Springs, Florida following his retirement, where he resided with his wife Brandy and their two sons: Ryan and Braden.

Brandy and Roy lived in the same city in Colorado growing up, first meeting as family friends as children. After Brandy’s family moved in high school, their families lost touch, but they met once again when she moved back with her family to Colorado in 1996.

They started a romantic relationship and got married in November 1998. According to PlayerWives.com, both Roy and Brandy’s families were members of The Church of Jesus Christ of Latter-Day Saints.

Upon his retirement announcement, Halladay said that wife and children were what helped him to his success over the years.

“They’ve been my biggest supporters, they really have, so thank you, guys,” he said at a press conference.

Halladay announces his retirement from baseballRoy Halladay, who won 203 games over 16 years, announces his retirement after signing a one-day contract with the Blue Jays Check out MLB.com/video for more! About MLB.com: About MLB.com: Baseball Commissioner Allan H. (Bud) Selig announced on January 19, 2000, that the 30 Major League Club owners voted unanimously to centralize all of Baseball's…2013-12-12T09:34:00.000Z

Immediately after his retirement announcement, Halladay said he was going to be fully invested in his sons’ baseball careers.

“They’re starting to strive for their dreams, and that’s something I want to be a part of,” he added at the press conference. 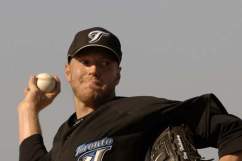 4. He Pitched the 2nd No-Hitter in MLB Postseason History

Halladay fell short of winning a World Series title in his career, but will be remembered as one of the best pitchers of this generation. He was expected to be in the conversation to be inducted into the Baseball Hall of Fame in Cooperstown, New York, for his success next year.

Arguably the greatest moment of his career came in his first-ever postseason start as a member of the Phillies. He was facing the Cincinnati Reds in Game 1 of the 2010 NL Divisional Series and left many in awe with his dominant no-hitter.

It was the second no-hitter in postseason history (Don Larsen had a perfect game in the 1956 World Series) at the time and was his second of the season.

Roy Halladay's cap and ball from his 2010 perfect game. His legacy lives on in Cooperstown. Rest in peace, Doc. pic.twitter.com/PqASdhK8bf

He also pitched a perfect game for the Phillies at the start of the season.

5. He Was a Philanthropist & Always Tried to Give Back to the Community

GettyHalladay and his wife, Brandy.

Numerous times throughout his career with the Blue Jays, Halladay was the nominee for the Roberto Clemente Award for his work with underprivileged children. The award recognizes players who “best exemplify the game of baseball, sportsmanship, sportsmanship, community involvement and the individual’s contribution to his team.”

Clemente notably died in a plane crash in 1972 when he was on board and aircraft that was traveling to Nicaragua with relief supplies for earthquake victims.

“Honestly, I don’t think there’s a lot of people who can be put in the same breath as Clemente,” Halladay said in an MLB.com story. “That’s a lot to live up to — the way that guy lived his life and what he did for people. More than anything, it’s important that they’re recognizing that in baseball.”

While playing for the Blue Jays, Halladay and his wife invited children from the Hospital for Sick Children and their families into what became known as “Doc’s Box” at Toronto’s home stadium.

As a member of the Phillies, Halladay and his family continued their charitable work. In 2013, the Phillies, along with his charity, the “Halladay Family Foundation,” announced the formation of the Phans Feeding Families program.

Halladay’s charity later became known as “The Isaac Foundation,” which sought to “provide support and advocacy for patients and families coping with rare diseases.”

The foundation had a gala planned November 11, four days prior to Halladay’s death.