Getty Tom Brady grew up going to Minnesota every summer.

Tom Brady could not think of a place better to go for his potentially record-breaking sixth Super Bowl win than Minnesota. Brady grew up in California, but spent his childhood summers in Minnesota where his mother Galynn Brady is from. Brady spoke about his Minnesota roots in an interview with the New York Daily News’ Gary Myers.

I’m part Minnesotan…My grandpa was a farmer, a dairy farmer, he farmed for corn. I would spend the summer [in Minnesota] and on occasion for Christmas. We would go ice fishing, shoot guns. My grandpa used to show me how to shoot .22’s. I’d go help him milk cows.

Galynn Brady grew up in Browerville, Minnesota- a town with a population of 763 people based on the latest census. Brady did end up leaving the West Coast for the Midwest in college as he attended Michigan. Ann Arbor is not exactly close to Browerville, but it is a lot closer than San Mateo, California. In an interview on Boston’s WEEI (via ESPN), Brady spoke about what it means to play Super Bowl LII in Minnesota.

My mom grew up in central Minnesota, a small town called Browerville. My grandparents lived there, and my grandma died of multiple sclerosis quite a few years ago. She was in a nursing home and my grandpa was a farmer; he was a dairy farmer, had a lot of cows and he farmed corn.

So every year we would go back in the summer and spend weeks. We’d go fishing in the summer, ice fishing in the winter, and milk the cows with my grandpa and just kind of tend to the farm. It was a great experience for me, [being] born in California…

I’ve always felt a connection to Minnesota. It will be fun because my uncles live there, my cousins. We were just back there last year when my grandpa passed away. It’s just a great place. It’s really special to go back there. The last time we played in Minnesota [2014 season], I had a lot of people come; a lot of family and extended family. So it will be a lot of great support there in Minnesota too.

During those Minnesota summers, Brady wasn’t treated like the world famous quarterback, and his cousins admittedly picked on “Tommy” when they were given the opportunity.According to ESPN, Brady has played Super Bowls in New Orleans, Houston, Jacksonville, Indianapolis and Arizona. He played in Arizona and Houston in two Super Bowls each. Vikings fans were one game away from seeing their team make history as the first team to play a Super Bowl in their home stadium. The dream ended when Minnesota lost to Philadelphia in the NFC Championship.

According to The Athletic, Brady’s grandfather Gordon died two years ago, and the Patriots quarterback came back to Minnesota to give a reading at the funeral.

Brady’s cousin, Paul Johnson, spoke with The Athletic’s Chad Graff about what Brady is like away from football.

“Through all these years and experiences with big shots, they’re just like all of us,” Johnson told The Athletic. “They’re simple. And the Brady’s are just so humble and kind. When we read all the crap from the haters, it’s painful because it’s like you guys have no clue who you’re bashing. These people are special.”

Vikings fans won’t get to see their team fight for a Lombardi trophy, so they will have to make due with a “part Minnesotan” quarterback trying to go in the NFL record books as the only player to win six Super Bowls. 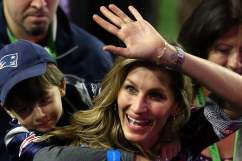