Getty The winning team does not get to keep the World Cup trophy.

FIFA will give out a total of $400 million to the 2018 World Cup participants, per Goal.com. The winning team in the 2018 World Cup will earn an additional $10 million to bring the total amount to $38 million. The second place team will still do well, taking home $28 million. According to Goal.com, both France and Croatia earned at least $9.5 million for making the final. There is an additional $10 million on the line for the winning squad.

Belgium earned an additional $2 million by winning the consolation game against England. The following is a total breakdown, per Goal.com, of how much FIFA awards money per round: Group Stage ($128 million), Round of 16 ($96 million), Quarter-finals ($64 million), Fourth Place ($22 million), Third Place ($24 million) and the final ($66 million).

France’s star player Kylian Mbappe said prior to the tournament he would be donating whatever money he made at the World Cup to charity. The number has continued to grow as France advanced in the tournament, and would be even greater if France can win the final. France is awarding their players a $350,404 bonus if they win the title. L’Equipe reported why Mbappe decided to give away his earnings.

After consulting with his entourage, Mbappé considers that it is not necessary for him to be paid when he evolves in blue and that his premiums can serve associative or humanitarian causes. Especially since they are very much lower than what players perceive in club. ‘When playing a World Cup, it’s a pleasure, because it’s a dream come true…So yes, there is money at stake. But I do not care! I do not play for that!’

The winning team also earns the right to raise the World Cup Trophy, one of the most iconic awards in sports. According to FIFA, the federation retains possession of the trophy after the ceremony. The original trophy was called the Jules Rimet Cup, but it went missing after Brazil won the 1970 World Cup. Italian artist Silvio Gazzaniga created the current trophy. Here’s how he described the trophy to FIFA.

The lines spring out from the base, rising in spirals, stretching out to receive the world. From the remarkable dynamic tensions of the compact body of the sculpture rise the figures of two athletes at the stirring moment of victory.

Even though the winning country does not get to keep the trophy, the ceremony is still one of the top moments of the tournament. FIFA describes how the trophy is constructed.

The new trophy is 36 cm high, made of solid 18-carat gold and weighs 6175 grammes. The base contains two layers of semi-precious malachite while the bottom side of the Trophy bears the engraved year and name of each FIFA World Cup winner since 1974.

Here’s a look at the World Cup prize money breakdown per round, courtesy of Goal.com. Each team will receive the cumulative amount that corresponds with how far they advanced in the tournament, as each round brings with it another financial bonus. 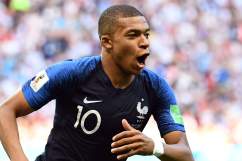 Kylian Mbappe’s Salary: How Much Money Is He Donating to Charity?

Read More
France, Soccer, World Cup 2018
How much money does Croatia or France earn for winning the World Cup? Find out the full breakdown of the World Cup prize money.