Getty Carson Wentz has still not been cleared to play.

The Philadelphia Eagles quarterback situation continues to be a hot topic of discussion as Carson Wentz recovers from injury. After Nick Foles’ strong playoff run, there was some thought the Eagles may try to trade Foles this offseason. It now makes sense that Philadelphia held onto Foles given Wentz’s recovery is stretching into the 2018 season. When will Wentz return from his injury? Eagles head coach Doug Pederson noted Wentz is close, but is waiting to get medical clearance. NFL Network’s Ian Rapoport reported Wentz is not going to return for a “few weeks”, and added Foles could be the starter into October.

“Obviously more rest and more time off heals the wounds, heals the [surgery],” Pederson told ESPN. “But listen, you’ve got to understand, too, Carson’s been out there, he’s been in 11-on-11 drills in training camp and this week, and so we’re just waiting to get the clearance…He’s had some great workouts here over the last few days.”

The Associated Press reported Wentz was seen warming up with a brace on before the Eagles Week 1 matchup against the Falcons. According to NBC Sports, Wentz tore both his left LCL and ACL on December 10. There has not been an official timeline released for Wentz to return. During the preseason, Wentz admitted to being frustrated by not being on the field.

“I think I’ve shown what I need to show them,” Wentz told NBC Sports on August 7th. “I think now it’s just a timetable, when the doc’s comfortable, and that’s ultimately their call…I feel really good mechanically and everything. Arm feels strong. Feel like I can make all the throws. Don’t feel like I’ve lost a step because of the knee.”

Doug Pederson Is Frustrated at Reports on Eagles Starting Quarterback

After reports initially surfaced that Foles was going to start Week 1, Pederson was not pleased with the media. According to NJ.com, Pederson denied the reports and accused the media of putting “words in his mouth.”

During game week, Pederson explained why he was upset, and reiterated that the decision had not been made at the time of the initial reports.

“The decision was not made at the time,” Pederson explained to ESPN. “I still wanted to hear from our medical team, I wanted to see exactly where Carson was at, and so if I came off a little abrasive, that was part of the reason.”

For Wentz to play, he has be cleared to take on contact which has not happened yet. It appears as though Wentz’s status will continue to be a week-to-week story until he is finally cleared to play. Foles struggled in the pre-season, but the current Eagles quarterback believes it will not carry over into the regular season.

“You have to get a rhythm,” Foles explained to Newsweek. “If I go play pickup basketball right now, I’m not going to be very good because I haven’t played in a long time. But if I play for a couple weeks, I’ll be back to who I used to be. I’ll be able to shoot everywhere, I’ll probably be able to dunk again a little bit. It’s the same with football. That’s how I am as an athlete.” 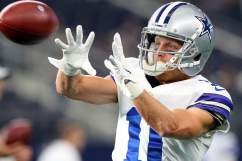