Photo by Maddie Meyer/Getty Images ATLANTA, GEORGIA - FEBRUARY 03: Marshawn Lynch of the Oakland Raiders arrives prior to Super Bowl LIII between the New England Patriots and the Los Angeles Rams at Mercedes-Benz Stadium on February 03, 2019 in Atlanta, Georgia.

Marshawn Lynch is a former NFL running back who won a Super Bowl with the Seattle Seahawks in 2014 and was selected to 5 Pro Bowls. He retired after the 2015 season but later applied for reinstatement and got traded to the Oakland Raiders in 2017. He played for the Oakland Raiders in the 2017 and 2018 seasons before saying he was retiring again in 2019. Despite retiring twice, he has hinted at another comeback in 2019.

Marshawn Lynch was one of the more colorful personalities during his time in the NFL. He was known for his refusal to speak to the media as well as his on and off the field antics. He was also one of the most physical running backs in the league, earning the nickname “Beast Mode” for his downhill, brutal running style.

He attended college at the University of California, Berkley where he earned the nickname “money” due to his frugal nature. His net worth is listed at $30 million but judging by his career earnings, endorsement deals, and growing clothing brand, that number may be much higher. 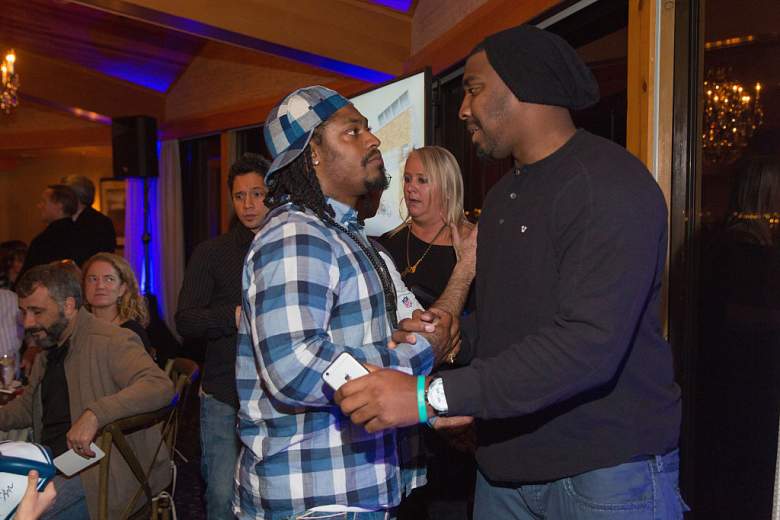 Marshawn Lynch grew up in one of the poorest sections of Oakland California. When asked about his thrifty nature in an interview with CBS Sports, he explained why he hates spending money, “If you came from eatin’ cereal with roaches in it before, Dawg . . . Feel what I’m sayin’? You wouldn’t want to do that again, right? Once you’ve seen the lowest of the low, you don’t want to go back. But, like I told you before, it’s not me–I have a good team and some smart family members around me.”

His upbringing taught him to be careful with money and to love chain restaurants like Applebees and Dave and Busters. He never wears jewelry or designer brands, and chooses to ride a bike to work rather than buying expensive cars.

2. Marshawn Lynch Allegedly Hasn’t Spent Any of the $50 Million He Made Playing Football 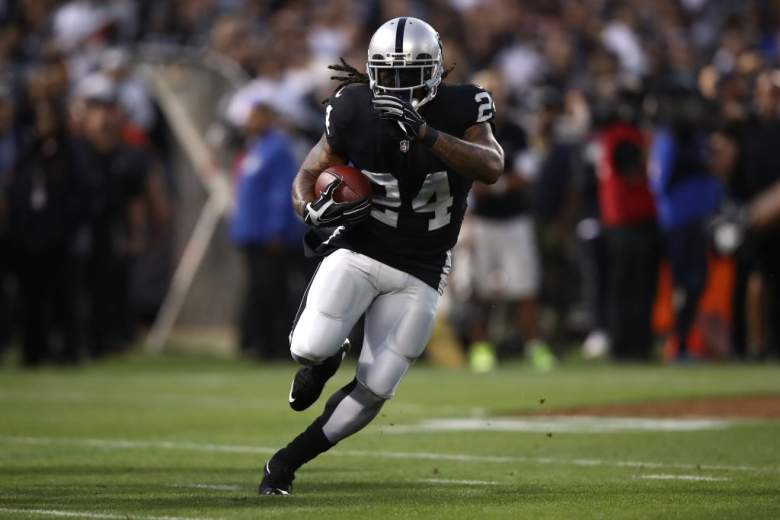 (Photo by Ezra Shaw/Getty Images)OAKLAND, CA – SEPTEMBER 10: Marshawn Lynch #24 of the Oakland Raiders rushes with the ball against the Los Angeles Rams during their NFL game at Oakland-Alameda County Coliseum on September 10, 2018 in Oakland, California.

According to Inc.com, Lynch lives solely off of his endorsement deals and hasn’t spent a dollar of his NFL contract money.

Lynch was selected 12th overall in the 2007 NFL draft by the Buffalo Bills. He signed a five year $19 million contract and took home about $14 million before being traded to the Seattle Seahawks. The Seahawks signed him to a 4 year $30 million extension prior to the 2012 season as he entered his prime. He then signed a two-year contract extension worth $24 million in 2015 before retiring after the season. When Lynch came out of retirement to sign for the Oakland Raiders he signed a two-year $9 million deal with a max of up to $16.5 million.

His total contract earnings throughout his career are upwards of $50 million dollars.

2. In 2015, Marshawn Was Earning $5 Million per Year Through Endorsement Deals Despite His Quiet Personality 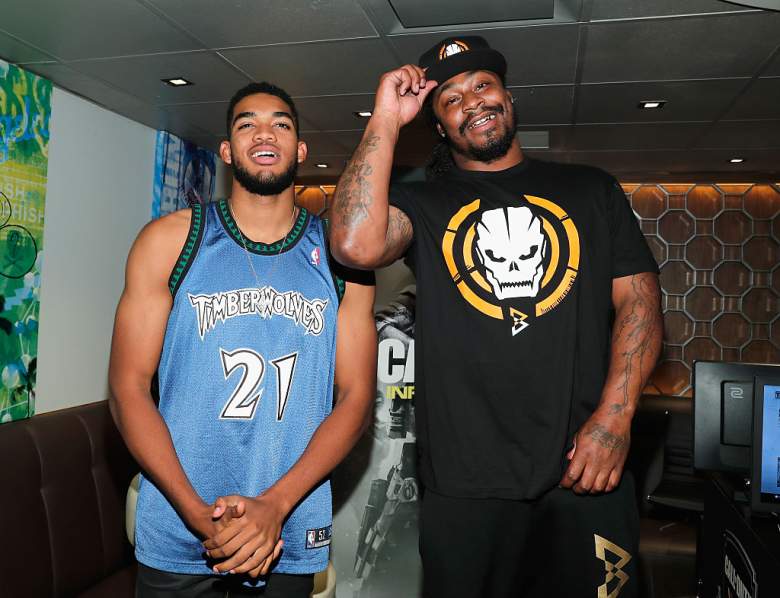 Although he may seem like a terrible spokesperson because he hates talking to the media and chooses to remain silent most of the time, Marshawn has endorsement deals with Nike, Pepsi, Skittles, Progressive, and Activision, according to Forbes.

In 2015, he was the highest paid running back in the NFL when it came to endorsement deals. Marshawn doesn’t say much at all, but his reclusive nature has endeared him to fans. In addition, his brutal, physical running style that earned him the nickname “Beast Mode” makes him a fan favorite across the NFL.

He also only endorses products he believes in. In a 2018 interview, the CEO of his Beast Mode brand, Bryon Sheng, told Ad Age, “It doesn’t matter how big the check is,” adding, “He rides his BMX bike to work every day, so he got a deal with SE Bikes. He only works with stuff he’s passionate about.”

3. ‘Beast Mode Apparel’ Is a Successful Clothing Company Marshawn Started from His Kitchen Table in 2013 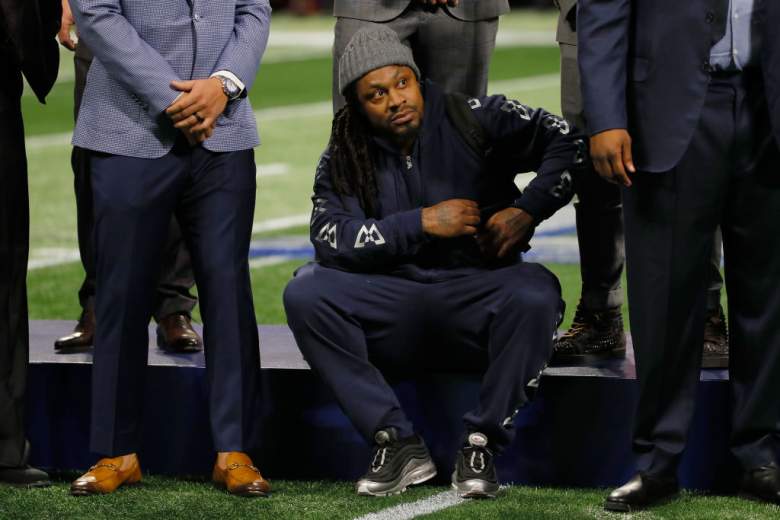 ATLANTA, GA – FEBRUARY 03: Marshawn Lynch looks on prior the start of the Super Bowl LIII at Mercedes-Benz Stadium on February 3, 2019 in Atlanta, Georgia. (Photo by Kevin C. Cox/Getty Images)

https://adage.com/article/special-report-building-brand/beast-mode-business-empire/312052
According to Ad Age, “In 2013, when he founded Beast Mode, Lynch did all the legwork himself—filling shirt orders, licking envelopes and signing a Seattle grocery store as his first retail partner.” Instead of partnering with a giant global company like Nike or Adidas, Marshawn does it all himself, relying on social media marketing instead of a million dollar ad budget to promote the brand.

The company currently sells clothing and accessories for men, women, and kids both online and through 9 brick and mortar stores in Seattle, Las Vegas, and Lynch’s hometown of Oakland. The brand continues to expand it’s operations and has grown significantly from one employee (Marshawn) to hundreds.

In addition to his clothing brand, Lynch has expanded into other ventures including “Beast Mobile”, his own affordable cellphone network and the FCFL or Fan Controlled Football League where fans call the plays. An idea inspired by Pete Carroll’s decision to pass instead of run the ball on the last play of Superbowl 49.

5. Lynch Created the Fam1st Family Foundation to give back to his hometown of Oakland, California.

Marshawn has made it no secret that he loves his hometown. As somebody who escaped poverty, he has committed himself and a lot of his money to give back to the city and help the youth escape a similar situation. According to their mission statement, their purpose “is focused on the underserved youth, aiming to build new generations of innovative thinkers to create solutions for the future of Oakland & the World.” They have several programs including basic teaching and tutoring as well as specialized classes for youths interested in Architecture or music making careers.

In an interview with Digital Trends, Marshawn explained that the foundation is, “For people that grew up the way I grew up, and/or worse, it gave them an opportunity to go ahead experience some of the finer things in life,” Lynch explains, “which is being able to attend a football camp that you didn’t have to pay for. Most of the [stuff], when I was growing up, you had to pay for all of that.”

Marshawn continues to be a staple in the local community of Oakland and a positive influence for the underprivileged youth in the city.