After being absent at the French Open, Roger Federer’s wife, Mirka Federer, is cheering on the tennis star at Wimbledon. Mirka has been spotted in the crowd throughout the tournament as her husband accumulated 100 Wimbledon wins. Away from the tennis court, the couple stays busy raising their four kids: Myla, Leo, Lenny and Charlene.

Mirka had a successful tennis career of her own before a foot injury prompted her to retire. Roger detailed why his wife retired from tennis in 2001.

“She had a problem with her foot, she could not walk properly anymore she had surgery, she tried to comeback and if comeback would have been okay and the pain were gone away she would have kept on playing, but her foot today still hurts her sometimes, so it did not go well for her and the decision was simple,” Roger said, per Tennis World.

The Couple Met at the 2000 Olympic Games

Roger and Mirka originally met at the 2000 Olympics in Sydney. Roger admitted to CNN that the couple “built up some chemistry” over the two-week period of the Olympic games.

“We were both playing for Switzerland in tennis, and then we spent two weeks together in those dorms. We were together with the wrestlers and all the other cool athletes,” Roger explained to CNN. “I guess over the two weeks, we built up some chemistry.”

Roger noted that it was an Olympic wrestler that prompted their first kiss. The tennis star admitted to CNN that he lied about his age since Mirka was older than he was.

It also turns out that wrestlers have big hearts — it was one of them who suggested Federer make the first move. “He said, ‘Hey, kiss her now.'”

The wrestler egged him on. “So, anyway, I did,” continues Federer.

Even so Federer had to fall back on the teenage trick of beefing up your age with fractions. “She told me I was so young when she kissed me. I tried to tell her I was almost 18-and-a-half. I tried to sneak in a quarter year.”

Roger & Mirka Got Married on Easter 2009

GettyMirka Federer pictured with the couples four children at the 2018 Australian Open.

Earlier this year, the couple celebrated their 10th wedding anniversary. The couple got married on Easter in 2009, and Roger released a statement after their wedding in Basel.

“Earlier today, in my hometown of Basel, surrounded by a small group of close friends and family, Mirka and I got married,” Roger said, per People. “It was a beautiful spring day and an incredibly joyous occasion. Mr. and Mrs. Roger Federer wish all of you a Happy Easter weekend.”

With four children, the couple remains busy when Roger is not competing in a tournament. Roger described fatherhood as the “most incredible thing in the world” in an interview with Tennis World.

“It did not change a lot,” Federer noted to Tennis World. “It’s hard sometimes saying no even though you are like, It does not make a big difference but I did not need to have kids for a wake up call in my life but it’s the most incredible thing in the to world to have kids in general and having that responsibility.” 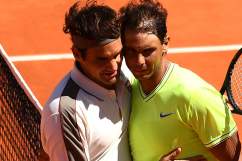