Getty Ito Smith is hoping to get the touches Tevin Coleman left behind.

The Atlanta Falcons offense is getting a makeover and running backs Ito Smith along with rookie Qadree Ollison are on fantasy owners radars. Devonta Freeman is returning from missing the majority of 2018 and is expected to be the team’s lead back this season.

Tevin Coleman signed with the 49ers this offseason leaving a hole in the Falcons backfield. Atlanta has a strong track record of having two fantasy-relevant running backs. However, the early indications are the Falcons may use multiple backs to fill Coleman’s role with the team.

Dan Quinn noted earlier in training camp that he has been impressed with the Falcons depth at running back and expects to use multiple backs based on their strengths. While I do not expect this to eat into Freeman’s workload, it makes Smith or Ollison more of a risky proposition in fantasy.

Smith has an ADP of 121 as the RB44 off the board, per Fantasy Pros. Given the Falcons crowded backfield, there are other players being selected in this range who I like better this season including Curtis Samuel (ADP 120), Geronimo Allison (ADP 117) and Parris Campbell (ADP 148). Smith still offers a bit of upside in just his second NFL season thanks to his involvement in the 2018 offense.

The Falcons Drafted Qadree Ollison in the 5th Round

When I attend Falcons training camp practices, no player receives more questions from fans than Ollison. The Falcons selected Ollison in the fifth round of the 2019 NFL draft. Ollison is a big running back that could be worth a flyer in dynasty leagues. As of now, he is far from fantasy relevant in redraft leagues as his 273 ADP indicates.

Falcons quarterback Matt Ryan emphasized how much the preseason will matter for the running back competition in Atlanta. Running backs need live game action to separate themselves through pass protection and taking on contact. Ollison produced at Pitt with 1,213 rushing yards and 11 touchdowns while averaging 6.3 yards per carry during his senior year. It will be interesting to see if the rookie back can take advantage of preseason carries with Freeman unlikely to see significant action until the regular season.

Kenjon Barner Is a Name to Watch

Barner has as much of an opportunity as Smith to be the first man up behind Freeman. For dynasty formats, Smith is preferable and still has an opportunity to be draftable in redraft leagues depending on how the preseason goes.

Overall, I expect Coleman’s touches that he left behind to be split among backs with Brian Hill also being involved. This could change if one of the running backs cements their status during the preseason. So far, Freeman looks to be the only Falcons running back that you can draft with confidence, but it is still early. 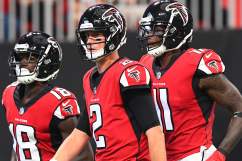