Apparently, the key doesn’t still work. After falling to 0-5 yesterday, the Washington Redskins have fired their head coach Jay Gruden.

His firing comes as no surprise to anyone, especially Gruden it appears, as the former coach has been painfully aware of his job insecurity for weeks. When asked Sunday whether he thought he would still have a job Monday, Gruden replied: “I’ll keep coming to work if the key works Monday,” per Josh Alper of Pro Football Talk.

The move comes just after Week 5 and is the first firing of an NFL head coach in the 2019 season. He was the longest-tenured coach with Washington since Dan Snyder took over the team.

The story of Gruden’s firing has already taken a number of unique and interesting turns. Specifically, it appears that this all happened after he was called to a team meeting at 5 a.m. on Monday. As Les Carpenter of The Washington Post reported, Redskins owner Daniel Snyder and team president Bruce Allen brought Gruden in bright and early.

“Gruden was summoned to the team’s facility in Ashburn for a 5 a.m. meeting Monday by owner Daniel Snyder and team president Bruce Allen, who informed him of the decision.” Carpenter detailed.

It’s a unique bit of info, but it’s also unknown whether or not the 5 a.m. meeting is the typical for Gruden, although that doesn’t appear to be the case on the surface. Regardless, the Redskins are now looking ahead to what’s next as they begin their search for a full-time head coach. 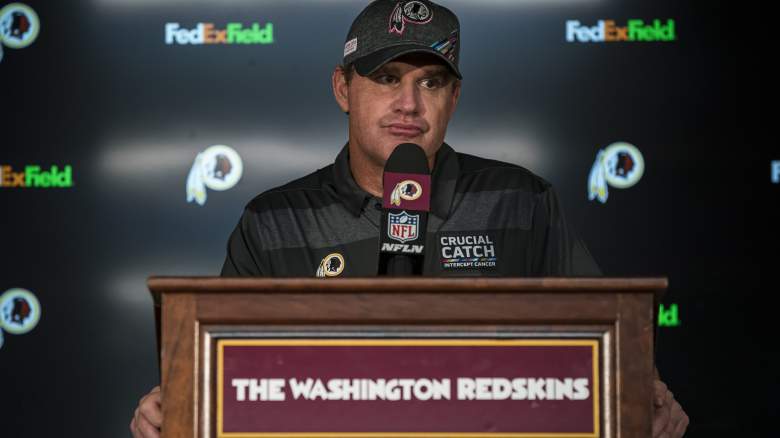 GettyThe Washington Redskins have fired their head coach Jay Gruden after getting off to an 0-5 start. (Photo by Scott Taetsch/Getty Images)

By firing Gruden early in the season, Dan Snyder and company should have ample time to find the right fit for the position and the team. They have a bit of a situation at quarterback currently, so look for the team to go after someone with an excellent track record shaping and building successful offenses.

A primary reason Gruden came under fire is the way he handled his quarterbacks. He had rookie Dwayne Haskins replace his starter Case Keenum in the second quarter of the team’s game against the New York Giants in Week 4, and after deeming the rookie out of Ohio State not-yet-ready to play, the move was puzzling to some.

Haskins didn’t play well, and Gruden took the brunt of the blame for not being judiciously smart with his players. Gruden finished his tenure as Redskins coach with a record of 35-49-1 (.418 win percentage).

He started eight different Quarterbacks in that time (number inflated by last year's catastrophe though), and won the NFC East once.

Will Dwayne Haskins See the Field Again This Season?

Redskins fans have been clamoring to see Haskins, and they now have to wonder if they’ll get their wish now that Gruden is gone. The former coach suggested that Haskins, who started just 14 games at Ohio State before being drafted in the first round by Washington, isn’t ready for the speed or action of NFL games yet.

“I’ve got to do what’s best for him,” Gruden said about Haskins a few weeks ago before changing his tune a bit last week: “No matter what we do with him, we’re going to be wrong,” he said, clearly frustrated. He may be right, but he certainly did not bring a level of calmness or cohesion to the team–at least not this season.

The quarterback position for the Redskins has been a carousel with no direction all year, and the team has shown a scary lack of discipline with the amount of penalties they’ve racked up this season. Whomever the team brings in next will have to want to work with and develop Haskins and will also be walking into one of the most uncertain situations at quarterback in the NFL.

READ NEXT: Game of Thrones Actress Roots For Chicago Bears