Getty Baker Mayfield had not previously heard about the racial slur allegations.

“Just asked Baker Mayfield about Garrett’s allegation that Rudolph used a racial slur and he seemed pretty stunned. Said wasn’t something he’d heard, including from anyone on the team, until I just asked him,” Trotter tweeted.

Garrett made the allegation as part of his initial comments during the appeal hearing in New York, sources said. It created an argumentative exchange about whether the allegation was permissible to be used in the appeal at that time…

Sources told ESPN that Garrett had informed some in the Browns organization that he was going to assert some sensitive information as part of his appeal.

Mayfield looked visibly frustrated on the field when he was asked about Garrett’s actions just minutes after the altercation. Leading up to Week 12, Mayfield offered clarification as to why he called the moment “inexcusible.”

“It is an emotional moment that is unprecedented for us,” Mayfield said, per Pro Football Talk. “The things I said about it being inexcusable, that is not to pile on to Myles and he knows that. It is about saying the standard in our game of football of protecting each other and then from there on, just setting a standard for us…I think that would have been the message if I was given some time. . . . [We] were talking about the wrong things because of some unfortunate events. No, I think the emotional part of it after the game is something that just happens. Our guys here know that I am going to have their back no matter what, and we know what we can and can’t do.”

Mason Rudolph addressed the Thursday incident in a prepared statement and brief Q&A before walk through.

“I consider it a privilege, not a right to be a part of the NFL. To be part of a first class organization … and I fell short of that expectation last Thursday night.” pic.twitter.com/2OHiDWLEBm

Rudolph has since denied the racial slur allegations that were reportedly mentioned during the appeal hearing. Rudolph’s attorney Timothy M. Younger released a statement to ESPN about the allegations calling this claim a “lie.”

“According to ESPN, in his appeal, Myles Garrett falsely asserted that Mason Rudolph uttered a racial slur toward him, prior to swinging a helmet at Mason’s uncovered head, in a desperate attempt to mitigate his suspension,” Younger explained to ESPN. “This is a lie. This false allegation was never asserted by Garrett in the aftermath of the game, never suggested prior to the hearing, and conspicuously absent in the apology published by the Browns and adopted by Garrett.”

Garrett has been suspended by the NFL indefinitely which means he is expected to miss the rest of the season, at minimum. The Browns star defensive end is appealing the NFL’s indefinite suspension. 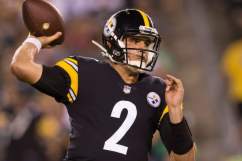