Getty Patrick Mahomes father, Pat Mahomes, poses as a member of the Montreal Expos in 2004.

While they were surprised by the sport, Patrick Mahomes’ parents are not amazed by their son’s athletic success. Patrick’s dad, Pat Mahomes Sr., was a longtime MLB pitcher and admitted that he expected his son to follow in his footsteps. Prior to the NFL season, Pat Sr. was honored at a Kansas City T-Bones game and discussed his son’s baseball ability with the Kansas City Star.

Patrick still ended up getting selected in the MLB draft despite making his football intentions clear. The Detroit Tigers selected the future Chiefs quarterback in the 37th round of the 2014 MLB draft. Tigers area scout Tim Grieve discussed Patrick’s outlook as a baseball prospect.

“If he had just focused on the mound, we’d be talking about somebody throwing 94-95,” Tim noted to MLB.com. “How he throws a football is a lot like how he throws a baseball.”

Patrick’s Mom, Randi, Knew Her Son Would Be a Professional Athlete

Patrick’s mom, Randi Martin, also knew there was something different about her son. Randi noted it did not take very long for her to develop a strong belief that Patrick was destined to be a professional athlete.

“I knew he’d be a professional athlete when he was 7,” Randi explained to The Kansas City Star. “I’m serious. There was never a question to him, and I knew he had the talent.”

Randi turned out to be correct and when Patrick made it to the NFL he was able to fulfill a promise he made. The Chiefs’ quarterback told his mom he would take her as his date to the ESPYS if he was ever invited.

Patrick comes from a diverse background with a caucasian mother and African-American father. Patrick’s parents divorced when he was young, but the two remain on good terms often cheering on their son at Chiefs games.

Being the son of a Major League Baseball Player has its advantages. Patrick grew up fielding for a number of legendary players including Derek Jeter and Alex Rodriguez. It was Alex that advised Patrick against playing football, but Chiefs fans are thankful he did not take his advice.

“He grew up in the clubhouse,” Pat Sr. told Newsday. “He was in the [2000] World Series shagging balls, catching fly balls. He took batting practice with A-Rod almost every day when I was with the Rangers. He took ground balls with Derek Jeter. He experienced it all. His arm’s always been fantastic. I knew that was his strong point. He was always a little special so I kind of knew he was going to be an athlete. His junior year [in high school], he topped out at 96. He was going to get drafted as an outfielder but he definitely could pitch.’’ 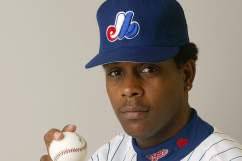