Dwyane Wade went in-depth about how he told Gabrielle Union that he fathered a son, Xavier, while their relationship was on a break in 2013. Dwyane confirmed the birth of the child during a 2013 press conference, but it once again became a topic after the release of Wade’s new documentary D. Wade: Life Unexpected.

“I had a child with someone else and I had to tell her,” Wade noted in the documentary, per ET Online. “Hardest thing I’ve ever had to do is man up and tell Gabrielle Union that I’ve had a child with somebody else. I couldn’t sleep. I wasn’t eating. When you hold something in that you know is going to come out and you have this information and you know it’s gonna f— somebody’s life up, that you care about, that you love, if it don’t hurt you, then you’re not human… Me and Gab just went through something that you never want to go through and we still came out of it.”

Dwyane previously addressed the rumors by confirming the birth of Xavier at a 2013 press conference. The former NBA All-Star described his birth as a “blessing” when he announced the news.

“I had a time, a part in our break, in our pain and our hurt, a blessing came out of it in my life, having a son that was born healthy,” Wade noted in 2013, per E Online. “So I’m moving on…I’m in the public eye, so obviously that’s a part of it. It comes with the territory.”

Dwyane Wade Is the Father of 4 Children

Wade is the proud father of a total of four children. His two oldest kids, Zaire and Zaya, came from his previous marriage to ex-wife Siohvaughn Funches. Wade and Union welcomed a daughter, Kaavia, via a surrogate in 2018. The couple has also helped raise one of Wade’s nephews. As a parent, Wade tries to emphasize responsibility, respect and routine with his children.

“The one thing I tried to do when I got custody of my kids, out of everything, I tried to teach them about responsibility, respect and routine,” Wade explained to USA Today. “The three R’s in my household is very important. If they understand their responsibilities, respect people and have routine — with my kids, I give them a list of everything they need to do from one to 16. Wake up in the morning, go to the bathroom, brush. Follow this list. Be responsible to this list. Respect this list. If you teach them in the household what to do, they won’t have a problem when they leave it. But if they don’t learn responsibility at the house, when you get outside those doors, it’s a wrap.”

After a short break, Wade proposed to Union during the same year he announced Xavier’s birth. The couple cited their busy work schedules as a big reason for their separation. The proposal took place just a few days before Wade’s press conference confirming the rumors that he had fathered a child outside their relationship.

“Always focus on what’s most important to me and my family, and that’s being a great father,” Wade said at the time, per E Online. “I’ve always tried to show my importance in my kids’ lives and it doesn’t change now. So, I, my lady and my family have continued to move forward, and I think that’s evident with the ring and the proposal that I gave her, with our lives.” 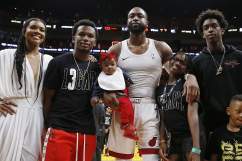