No matter who you’re rooting for in the World Cup, all eyes are on Brazil, and plenty of people are craving a caipirinha, Brazil’s national cocktail.

The drink is made from a Brazilian rum-like liquor called cachaça. Rumor has it that the drink originated as medicine, and eventually became a mainstay on the Brazilian party scene, where celebrations are rarely held without it.

Cachaça used to be tricky to find, but most liquor stores carry it these days. Even Walmart and Costco stock the sugarcane-derived rum on their shelves.

Here’s how to make one for your World Cup party:

For one drink you will need:

Quarter the lime and muddle (smash) it in the bottom of the glass with the sugar. Fill the glass with ice, and pour the cachaça over the mix. Serve with a mint leaf garnish if so desired. 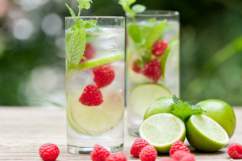