Florida State was on the ropes Thursday night at Louisville. The second-ranked Seminoles trailed by 21 in the second quarter and were getting pushed around by the Cardinals, who came in among the national leaders in several defensive categories.

But with its unbeaten season in jeopardy, FSU responded, rallying for a 42-31 win and keeping its playoff hopes in excellent shape.

Jameis Winston threw a career-high 3 interceptions, but the reigning Heisman winner also threw for 401 yards and 3 touchdowns, improving to 21-0 as a starting quarterback as FSU improved to 8-0.

Check out the full box score here and read on for a recap and highlights.

With Florida State trailing by 3 with less than 4 minutes left, the Noles’ defense gave its offense a chance to take the lead, and the offense delivered immediately.

On the first play of the drive, Dalvin Cook broke loose for a 38-yard touchdown run — his second long touchdown run of the game — to make it 35-31 Noles with 3:46 left in the game.

FSU’s defense came up big again when the Noles stopped Louisville on 4th-and-2, when Will Gardner’s pass bounced off the hands of tight end Charles Standberry.

The Noles then iced it on the ensuing possession, when Freddie Stevenson scored on a 35-yard reception with 2:11 left in the game.

FSU Took the Lead on a 47-Yard TD, but Louisville Answered Immediately

With the Noles trailing by 3 at the Louisville 47, Winston threw a dangerous pass that could have been intercepted by two Louisville defenders. But when two defenders collided, the ball found its way to Ermon Lane, who got behind the Ville secondary and took it to the house for a touchdown that gave FSU its first lead of the game at 28-24 with 12:48 left in the game.

But Louisville, which hadn’t scored a touchdown since the second quarter, answered with one on its ensuing possession when Michael Dyer scored his third of the game, putting Louisville up 31-28 with 9:20 left in the game.

Facing a 3rd-and-4 from the Florida State 32, Winston let it fly, hitting Travis Rudolph for a 68-yard touchdown strike that brought the Noles to within 24-14 with 9:51 left in the third quarter.

The Seminoles struck on another big play when Dalvin Cook broke loose for a 40-yard touchdown run that made it 24-21 with 6:17 left in the third quarter.

The Seminoles appeared to have taken the lead when Winston hit Nick O’Leary for a 14-yard touchdown strike, but the score was nullified by a holding penalty on FSU’s Bobby Hart. The Noles went for the tie on a 41-yard-field goal attempt by Roberto Aguayo, but Aguayo missed for the first time of the year, allowing the Cardinals to escape unscathed.

Louisville Got a Huge Stop on 4th Down, Then Extended Its Lead

Louisville emerged leading 24-7 after a strange succession of events that started when Jameis Winston threw yet another interception but forced a fumble on the same play.

FSU got a huge break when Holliman picked off Winston, but Winston poked the ball loose and the Noles recovered. But the Louisville defense stuffed Karlos Williams on 4th-and-1 on FSU’s ensuing possession, giving the Cardinals the ball at the FSU 49-yard-line and leading to a 33-yard John Wallace field goal that extended the Ville’s lead to 24-7 with 9:51 left in the third quarter.

Michael Dyer scored from 4 yards out with 12:13 left in the second quarter, capping a 7-play, 80-yard drive that put the Cardinals on top 7-0.

After linebacker James Burgess picked off Jameis Winston, Dyer scored again with 5:11 left in the quarter, this time from 12 yards out, making it 14-0 Ville.

And after Winston threw his second pick of the night — this one intercepted by Gerod Holliman — Will Gardner cashed in by hitting Gerald Christian for an 11-yard touchdown strike that stretched the lead to 21-0 with 2:09 left in the half.

Florida State finally got on the board with a lucky break with 33 seconds left in the first half. Karlos Williams fumbled a handoff from Winston, but Nick O’Leary recovered it in the endzone for a touchdown that cut the Cards’ lead to 21-7.

FSU Got a Goal Line Stand on Louisville’s 1st Drive

What a huge defensive stand by the #Noles. FSU takes over on offense from their own 2 yard line.

A 71-yard DeVante Parker reception put Louisville on the cusp of scoring on its first drive less than 2 minutes in, but the FSU defense came up with a goal-line stand to keep the Cardinals off the board. 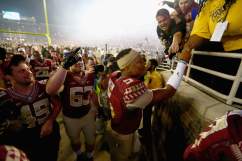 Florida St. at Louisville: 5 Fast Facts You Need to Know