The Cincinnati Bengals and the Oakland Raiders face off to begin the 2015 season. The Bengals enter the season hoping to go from simply making the playoffs to advancing far into January. Meanwhile, the Raiders hope their young team can reach its potential sooner rather than later.

The Bengals continue to be led on offense by quarterback Andy Dalton and top receiver A.J. Green. Additionally, Jeremy Hill and Gio Bernard are a dynamic duo in the backfield. The key on offense continues to be more consistency from Dalton at the quarterback position.

The Raiders made it a point this offseason to provide second-year quarterback Derek Carr with some help. They added Michael Crabtree and Amari Cooper at wide receiver. Carr seems to have built great chemistry in the preseason with both receivers. Latavius Murray is expected to the featured back after coming on strong late last season.

Here is what you need to know about the Bengals and Raiders opening game:

Who:
Cincinnati Bengals vs. Oakland Raiders

Line:
Bengals by 3 (Line is according to OddsShark and subject to change.)

Last Meeting:
The Bengals defeated the Raiders 34-10 in 2012. Andy Dalton threw for 3 touchdowns in the game.

Reports indicate that defensive lineman Geno Atkins is back in top form. Atkins suffered a torn ACL in 2013 and did not look quite right last season. If Atkins is back to playing at the level he was at before his injury, it would be a huge boost to the Bengals defense.

Keep an eye on the Bengals running game against an underrated Raiders defense. The Bengals have two starting-caliber backs in Hill and Bernard that will be put to the test Sunday.

This game marks the regular season debut of Amari Cooper. Cooper looked great in preseason and combined with Michael Crabtree should add more excitement to the Raiders offense. Keep an eye on Latavius Murray as he starts the season as the featured back. Finally, Derek Carr is no longer a rookie and it will be interesting to see how he progresses from his first to second season.

Despite not being favored, the Raiders have a good chance to not only cover the spread but win the game. Oakland has been bad for so long that they are going to be overlooked heading into the season. The Raiders have hit with their top draft picks over the past few years and have a good, young nucleus. Take the Raiders to win outright in the season opener at home. 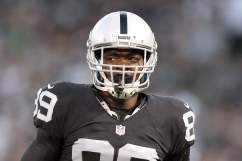 Read More
Football, NFL, Sports Betting
The Oakland Raiders host the Cincinnati Bengals in Week 1. We breakdown the contest and predict who will win the game.