Akeem Hunt is one of several Texans players to make surprise contributions this year. Getty)

In August, it seemed the Texans team shown on Hard Knocks was destined for the playoffs.

In October, it seemed the Texans team that was blown out by Atlanta was destined for a last-place finish.

With two weeks left in the season, there are still no answers.

The Texans, now on their fourth quarterback, are (for now) in line to host the Chiefs on Wild Card weekend. Today they overcame a ten-point deficit to win at Indianapolis for the first time in 13 years. After T.J. Yates injured his knee sliding, Brandon Weeden was called into action and led the Texans to victory.

Bill O’Brien may have made his name in this league as an offensive coach, but it’s his defense leading the Texans into the postseason. The Colts had just 50 rushing yards Sunday and turned the ball over twice, including a late interception to ice the game. If the Texans are going to hang around in January, they’ll need more of that pass rush that roughed up Matt Hasselbeck this week.

Here are the full AFC Standings after Week 15:

If the Season Ended Today: It would be forever known as “Brandon Weeden Day” in Houston. The Texans would celebrate making the playoffs, only to realize who thy’d face in the Wild Card round. Kansas City is the hottest team in the AFC, and they pushed the Texans around on opening day. Brian Hoyer threw an interception on the first play of the season, but he’s been much more efficient since then.

What Needs to Happen: At the very least, the Texans need to win one more game. That would be Week 17, when the Texans host the Jaguars. Ideally, the Texans would want to play the Jets in the first round, whom they defeated in November. That could happen if the Jets go 1-1 in the final two games, but the Steelers lose out. It’s all about avoiding the Chiefs.

Who’s Left on the Schedule: Heading to Tennessee next week shouldn’t be a challenge. The Titans staved off embarrassment against the Patriots this week, but lost Marcus Mariota to his second knee injury this season. The real concern is Jacksonville. They might have lost to the Falcons Sunday, but Blake Bortles is playing well enough to make the Texans nervous heading into the final week.

Best-Case Scenario: Win out. All you can ask for is to control your own destiny, and that’s what the Texans can now do. Now they can finish the season against two teams they’ve previously beaten, and can prepare for a return to the playoffs. Best-case scenario is to draw the Jets, in what would be a war between two great defenses. After taking care of New York, an ideal matchup would be Cincinnati. Houston ended their undefeated start to the year, and that was before Andy Dalton was sidelined with a thumb injury. 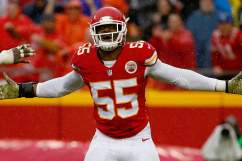