Murray has become one of the most popular figures in the sport, with a net worth estimated at $70 million, according to Forbes. Murray has credited his family to much of his success throughout the years.

Along with his wife Kim, one person who is always in the stands is his mom Judy, who coached him in his younger years.

Click through the gallery to see and learn more about Judy, and her relationship with her son. (Getty) 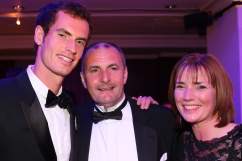 Read More
Andy Murray, Sports, Tennis
Andy Murray has spoken about the important role his family plays in his life on and off the court. Click through the gallery to learn more about his mom, Judy.