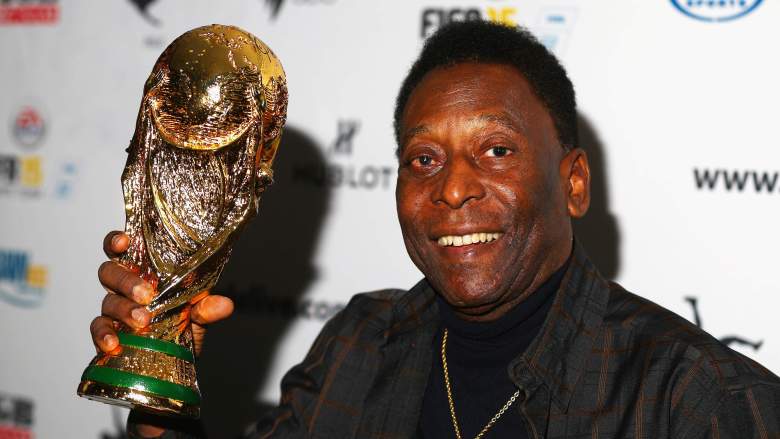 It’s never a bad time to go back and re-examine Pelé’s out-of-this-planet career, but it especially makes sense with the legendary Brazilian footballer expected to light the Olympic Cauldron during Friday night’s Opening Ceremony in Rio.

Born in 1940, it didn’t take Edson Arantes do Nascimento long to become an international sensation. At the 1958 World Cup, Pelé, who at the time was the youngest player ever in World Cup history, scored the only goal of the match in the quarters against Wales, followed that up with a second-half hat trick against France in the semis and added a brace in the final against Sweden.

His first against Sweden is regarded as one of the most iconic goals in the tournament’s history:

“When Pele scored the fifth goal in that Final, I have to be honest and say I felt like applauding,” Sweden’s Sigvard Parling would later admit.

Due to injuries, Pele played just two matches during Brazil’s 1962 World Cup title run and struggled as they were ousted during the group stages in 1966.

He returned with a vengeance in 1970, though, scoring four times and winning the Golden Ball (best player of the tournament) en route to capturing his third World Cup title. During the 4-1 victory over Italy in the final, he not only scored the game’s opening goal but also tallied two assists.

Following the tournament, Britain’s Sunday Times put it best: “How do you spell Pele? G-O-D.”

While statistics weren’t kept as accurately as they are now, Pele is credited by the International Federation of Football History & Statistics (IFFHS) with 77 goals in 92 matches with Brazil, as well as a record 541 league goals with Brazilian club Santos, who he led to two Copa Libertadores titles and six Campeonato Brasileiro Série A titles.

Across all competition, including friendlies and tour matches, he compiled 1,281 goals in 1,363 matches. Here are some of his best ever:

In 1999, “The King of Football” was named FIFA Player of the Century and the International Olympic Committee’s Athlete of the Century.

“Pele is the greatest player of all time,” said former Bayern Munich star Franz Beckenbauer. He reigned supreme for 20 years. All the others–Diego Maradona, Johan Cruyff, Michel Platini–rank beneath him. There’s no one to compare with Pele.