Getty Brian Daboll with the New York Jets in 2008.

Alabama football’s 2016 season came to a messy conclusion after head coach Nick Saban relieved departing offensive coordinator Lane Kiffin of his play calling duties just days before the College Football Playoff National Championship game against Clemson and replaced him with Steve Sarkisian. took over the reigns but it wasn’t enough as Alabama fell to Clemson.

Once Sarkisian departed for the NFL, the role needed to be filled permanently and Alabama went with long-time NFL assistant Brian Daboll. This will become Daboll’s first college job since 1999 when he was a graduate assistant at Michigan State under Nick Saban.

Here are the five fast facts you need to know about Daboll.

Brian Daboll has a lot of talent to work with during his first year at Alabama. The offense is led by reigning SEC Offensive Player of Year Jalen Hurts and also returns running backs Bo Scarbrough and Damien Harris along with wide receiver Calvin Ridley.

Quarterback Jalen Hurts, now in his sophomore season, will look to thrive under Daboll. Daboll has worked with a variety of quarterbacks in his past as an NFL coordinator, although none of them were elite by any means. Those names include Brady Quinn, Derek Anderson (not his breakout 2007 year), Colt McCoy, Jake Delhomme, Seneca Wallace, Matt Moore, J.P. Losman and Matt Cassel.

While none of those quarterbacks really caught the NFL by storm, Alabama is hoping Daboll will be able to help Hurts ascend to new heights. Alabama doesn’t have the strongest track record in terms of their quarterback’s success in college translating into the pros so Daboll might be able to change that since he was an NFL coordinator.

Daboll’s coaching and playing days started with defense and Saban believes that will help Daboll succeed with this job. Daboll worked as a defensive assistant from 2000-2001 with the New England Patriots.

“I think any good offensive coach really understands defense,” Saban told AL.com. “If you’re playing a certain coverage on defense and you really understand how that coverage is being taught and implemented and what the keys are for the defensive players, then you have a better chance to exploit that by how you attack it with the patterns and what gives it a problem.”

2. Daboll Has Been Part of All 5 Patriots Super Bowls

A big part of Daboll’s resume is the fact that he can say he has been part of all five Patriots Super Bowl teams. He had stops with other teams in between but he always found a way back to the Patriots during their Super Bowl runs.

From 2000-2001 he was on the Patriots coaching staff as a defensive assistant. From 2002-2006 he was a wide receivers coach for the team. He left the team after then and bounced around several years before ending up back with the Patriots. In 2013 Daboll served as an offensive assistant before serving as the tight ends coach from 2014 to 2016.

With Alabama nearly always in the National Championship conversation, Daboll is looking to add a sixth championship ring to his resume.

Coordinators have been dropping like flies under Saban as of late as Daboll becomes the sixth OC since 2007, when Saban took over. He’s technically the fifth coordinator if you don’t count Sarkesian but we decided to include him.

The first coordinator under Nick Saban was Major Applewhite and at the time he was the youngest OC in Division 1-A at 28 years of age. After one season Applewhite left to join Texas as its running backs coach.

From 2008-2011 Jim McElwain held down the spot and won two National Championships in the position. He later left the job to become the head coach at Colorado State and later became the head coach of Florida, one of Alabama’s SEC rivals.

Doug Nussmeier took over from McElwain from 2012-2013, won a National Championship and helped quarterback A.J. McCarron set several school passing records. He later left to accept at job at Michigan to become their offensive coordinator before joining McElwain at Florida.

Lane Kiffin took from 2014-2016 and helped turn Alabama into one of the top offenses in College Football. He ended up taking another job which led to him being removed and having Sarkesian replace him for one game.

Daboll has spent four years as an offensive coordinator in the NFL for three different teams. His brief stints there haven’t ended well to inspire much confidence. However, that’s not the full story.

The three teams he spent time with in the past include the Cleveland Browns, Miami Dolphins and Kansas City Chiefs. Even today, none of those teams are known for having a high-powered offense.

Under Daboll, the Browns ranked last out of the NFL’s 32 teams in total offense in 2009 and then 29th in 2010. The Dolphins ranked 22nd in total offense under Daboll in 2011 while the Chiefs were 24th in 2012. His tenure with the Dolphins did result in both a 1,000-yard rusher and a 1,000 yard receiver for the first time in franchise history.

As mentioned earlier, Daboll didn’t have a whole lot to work with in terms of NFL quarterbacks so that could be why these offenses ranked so low. Alabama has a strong offense with a bonafide star at quarterback so things have a chance to be different this time around.

5. Daboll is Married With 5 Children

Daboll is a 1997 graduate of the University of Rochester where he started two seasons at safety for the football team. On top of his playing career, he also received an Economics degree.

His Alabama biography states he is married to his wife, Beth, and together they have five children – Marky, Christian, Aiden, Haven and Avery – with a sixth on the way. Daboll is a Buffalo, NY native. 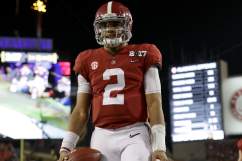 How to Watch Alabama Football Online Without Cable in 2017