Getty The Sixers signed Joel Embiid to a contract extension over the off-season.

The Philadelphia 76ers continue to be one of the most intriguing teams in the NBA. Philadelphia essentially gets two incoming top picks with Ben Simmons coming back from injury along with true rookie Markelle Fultz.

Here’s a look at the current Sixers roster and projected starting lineup heading into the 2017-18 season.

Fans may be alarmed to see Fultz will likely start the season on the bench given he was the No. 1 draft pick. Fultz did not have the best pre-season, but did show flashes during summer league action. The Sixers will have a balancing act in playing Ben Simmons and Markelle Fultz at point guard. It will be interesting to see if Fultz can find his footing and end the season in the starting lineup.

In addition to the rookies, the Sixers signed J.J. Redick who gives Philadelphia a long-range component to their offense. The Sixers group of big men also have plenty of intrigue.

In particular, the Sixers have four young bigs who will be jockeying for minutes. The Sixers showed their long-term commitment to Joel Embiid after signing him to a contract extension despite Embiid’s injury history. Embiid will start the season on a minutes restriction for each game.

The problem for the Sixers has never been talent. The challenge for Philadelphia has been keeping their young stars on the floor. Outside of the top teams, the East is wide open with the majority of stars heading West over the summer. Based on the talent on their roster, the expectations for the Sixers should be the playoffs, but Philadelphia will need better fortune when it comes to health. 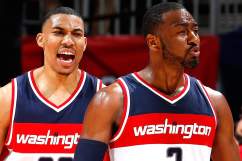