As Shut Up and Dribble will document tonight, former Cincinnati Royals player Oscar Robertson was an integral part of the Robertson v. National Basketball Association suit of 1970, which led to reform of the NBA’s strict free agency policy and higher salaries for players.

Robertson, 79, continues to push for legal change today. In 2015, he was part of a group of investors who placed a marijuana legalization initiative on the Ohio ballot. Robertson appeared in a television advertisement advocating for passage of the initiative, though it was ultimately turned down. He also wrote the 2013 book The Big O: My Life, My Times, My Game, about the racial inequality he had to face throughout his career.

Robertson has taken on many other jobs since his retirement. He worked as a color commentator with Brent Musburger on games televised by CBS during the 1974–75 NBA season, where he became known for his trademark expression: “Oh, Brent, did you see that!” In 2000, Robertson was hired on as the director of Countrywide Financial Corporation, and remained as such until the company’s sale to Bank of America in 2008.

In July 2004, Robertson was named interim head coach of the Cincinnati Bearcats men’s basketball team while head coach Bob Huggins served a suspension for a drunk-driving conviction. Robertson only coached the team for a month.

He Spent 8 Years as the Director of Countrywide Financial Corporation

Robertson was also the first player to average more than 10 assists and 10 rebounds per game, respectively. He was enshrined in the Naismith Memorial Basketball Hall of Fame on April 28, 1980, and received the “Player of the Century” award by the National Association of Basketball Coaches in 2000.

As Shut Up and Dribble attests to, however, his most influential actions were off the court, and in the courtroom. In Sam Smith’s book Hard Labor: The Battle That Birthed the Billion-Dollar NBA, Jerry West was quoted as saying: “I don’t think they know how much one person, Oscar, could make this much difference in their lives, in their pay, the way they are treated, how much they are taken care of today.”

When asked the impact that his court case had on the game, Robertson told USA Today that it was a sacrifice worth making. “Some know more than others but they’re benefitting from it, which is the main thing,” he observed. “That means more than anything. They’ve elevated the game and people love the game.” In 2018, Robertson was given the Lifetime Achievement Award at the NBA Awards. 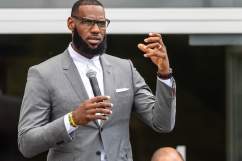 Showtime’s ‘Shut Up and Dribble’: Meet the Cast