How can you still check your IV stats on Pokemon GO? (Nintendo)

Now that Niantic has announced that it’s banning Pokemon GO players who show clear signs of cheating, which can include using a third-party app, is there any way to check the IV of your Pokemon without possibly risking your account?

If you have to enter your login credentials into a third-party app, then it’s possible that you’ll end up banned. Although it’s still unclear if people using PokeAdvisor have been banned or not, many players are wanting to play it safe and just not use any IV log-in apps and not risk their accounts. If you want to calculate IVs safely, you’ll need to use IV calculators that don’t require logging in. The process is a lot slower than the old third-party apps, but you shouldn’t be at risk of banning if you use this method. Keep in mind that it’s possible that calculating IV for your Pokemon at all might still be against Niantic’s Terms of Service. It’s unclear at this time if that’s the case, but be aware before you start calculating IVs.

Here are a few IV calculators that players recommend:

Poke Assistant: Poke Assistant is one tool that Pokemon GO players on Reddit recommend. The IV calculator is here. You’ll enter your Pokemon type, its CP, HP, Dust and whether it’s powered. From this, you’ll get your best and worst possible IVs, compared with the species’ best and worst IVs and its evolutions. If you evolve or power up a Pokemon, you can refine the calculation to narrow down the possible IV options. This tool does not connect with your Pokemon GO account.

The Silph Road IV Rater: Another tool you can use is The Silph Road IV Rater (go to the web link and then click on “IV Rater” at the top of the page.) Pick your species, enter your trainer level, and then adjust the slider according to your Pokemon’s stardust and candy needed for its next power up. Then enter your CP and HP and you’ll get an IV rating for your Pokemon. This tool requires manual entry and does not connect to your Pokemon GO account.

GoIV: GoIV is another popular IV calculator app, but this one is a little sketchier as far as whether it could get you banned. This app screencaps your numbers and outputs the IV. According to one Redditor, overlay apps could be in danger of causing bans because overlays created for Ingress ended up getting some players banned by Niantic. However, the app’s creator wrote on Reddit that he thinks getting banned for GoIV is “extremely unlikely, unless Niantic has resorted to scanning your phone for certain packages and just banning you if your device has an app they don’t like.” GoIV is planning to release a version that doesn’t require Internet permissions for people who want greater privacy. In the meantime, you can learn all about GoIV on their subreddit here. This tool, which is Android compatible, isn’t available on the app store. You can download it on Github here.

Google Spreadsheets: Some Pokemon GO players have put together Google spreadsheets that you can use to roughly calculate your Pokemon’s IV. This one, recommended by Reddit, was created by Redditor TheIrishGoat. To use the sheet, go to “File > Make a Copy.” More detailed instructions are on the spreadsheet itself.

Do you have any other suggestions for calculating IVs and not getting banned? Let us know in the comments below. 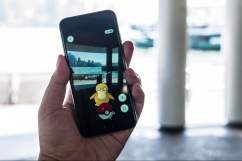 What Are IV Stats in ‘Pokemon GO’?