With Epic Games showing a willingness to collaborate without video games in Fortnite Season 5, fans have been speculating about what could come next.

This season has been bringing a variety of bounty hunters from other games, so that’s why we’ve seen Kratos and Master Chief already arrive. Since Chief was included, it’s clear that the term bounty hunter is being used very loosely, so there are all sorts of characters that can be added.

One such video game character that a lot of players would be interested in seeing is the Doom Guy, made popular from the Doom games.

Now, this character doesn’t actually have a name, but that hasn’t stopped him from being extremely popular. He’s showing up in Fall Guys, so why not Fortnite? 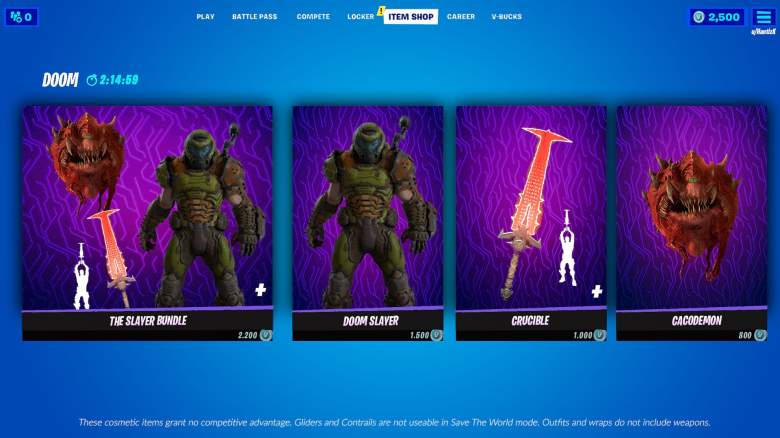 Thanks to Reddit user HantizX, we can actually visualize what the Doom Slayer would look like. This is just a fan-made concept, but it’d be very easy to picture this running around in your game.

Many would argue that he looks too close to the Master Chief outfit, but there are enough differences that would help it stand out. It also helps that the Doom franchise has been going through a bit of a renaissance lately with the reboot in 2016.

The game’s reach is going further than just the FPS genre and it’s attracting a lot of new fans.

3 AGGRESSIVE COSTUMES
STARTING 12th JANUARY
GRAB AND FALL UNTIL IT IS DONE pic.twitter.com/1QRLxxf2PF

When Doom Eternal launched in 2020, it did so on the same day as Animal Crossing, so there were a lot of players shipping the Doom Slayer and Isabelle in what was a crossover nobody could see coming.

Now, we have the slayer coming to Fall Guys, another family-friendly game that you typically wouldn’t think twice about running into a demon killer.

At the end of the day, it’s up to Epic Games on whether or not they want to let the Doom Slayer into Fortnite, but it appears there will be a large portion of the fanbase who would welcome him with open arms.